As stated in the following London Gazette citation, Paul Triquet is a recipient of the Victoria Cross. This medal is awarded for the most conspicuous bravery, a daring or pre-eminent act of valour, or self-sacrifice or extreme devotion to duty in the presence of the enemy. 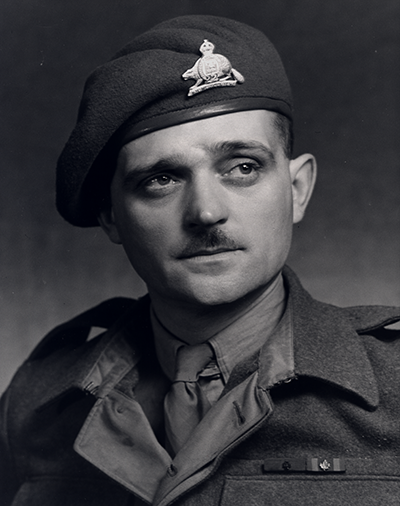 Paul Triquet was born in Cabano, Quebec on 2 April 1910. At the age of 17, he joined the Royal 22e Régiment. In December 1943, Captain Triquet was a company commander with the regiment’s battalion serving in Italy with the Canadian Army’s 1st Infantry Division.

On 13 December 1943, plans were made by the 1st Infantry Division to get around the western end of the German defences running inland from the Adriatic Sea just south of the small coastal city of Ortona. By “turning” the enemy line, the 1st Division hoped to open the way to Ortona, its objective, and to capture the city. The key to the success of the plan was an advance by the Royal 22e Régiment north-eastward along the road to Ortona to seize an important road junction.

At 10:30 on the morning of 14 December “C” and “D” Companies of the “Van Doos”, supported by tanks from “C” Squadron of The Ontario Regiment, began moving up both sides of the road. The force had already met and destroyed two German tanks. On the left, about half-way to the hamlet of Casa Berardi, Captain Triquet’s “C” Company began to encounter fierce resistance from enemy machine guns and infantry sheltered in wrecked buildings and in terrain favourable to the defenders, all backed up by tanks and self-propelled guns. On the right, “D” Company became lost and took no further part in the action that day. “C” Company and the Ontario tanks proceeded to fight their way through the opposition, knocking out three more tanks and eliminating the Germans’ defensive positions. At this stage, the company had been reduced to fifty men and one officer – Triquet. Although ammunition was running low, Triquet, his men and their supporting tanks persevered in the attack, capturing Casa Berardi late in the afternoon and driving on nearly to the crossroads. Here the survivors, now only fifteen strong with four tanks, were stopped by mortar fire, and retired to Casa Berardi to prepare for counterattacks. As darkness fell, “B” Company of the Royal 22e arrived to reinforce Triquet, and by the early hours of 15 December the battalion’s remaining two companies had reached Casa Berardi. The western flank of the German line had been turned. For his courageous and determined leadership resulting in the capture and retention of Casa Berardi, Captain Triquet received the Victoria Cross.

“For determined leadership and example.

The capture of the key road junction on the main Ortona-Orsogna lateral was entirely dependent on securing the hamlet of Casa Berardi. Both this and a gully in front of it had been turned by the Germans into formidable strong points defended by infantry and tanks.

On 14th December, 1943, Captain Triquet’s company of the Royal 22e Regiment with the support of a squadron of a Canadian Armoured Regiment was given the task of crossing the gully and securing Casa Berardi. Difficulties were encountered from the outset. The gully was held in strength and on approaching it the force came under extremely heavy fire from machine guns and mortars. All the company officers and 50 per cent of the men were killed or wounded. Showing superb contempt for the enemy Captain Triquet went round reorganizing the remainder and encouraging them with the words ‘Never mind them, they can’t shoot’. Finally when enemy infiltration was observed on all sides shouting ‘There are enemy in front of us, behind us and on our flanks, there is only one safe place – that is on the objective’ he dashed forward and with his men following him, broke through the enemy resistance. In this action four tanks were destroyed and several enemy machine gun posts silenced.

Against the most bitter and determined defence and under heavy fire Captain Triquet and his company, in close co-operation with the tanks forced their way on until a position was reached on the outskirts of Casa Berardi. By this time the strength of the company was reduced to 2 sergeants and 15 men. In expectation of a counter-attack Captain Triquet at once set about organizing his handful of men into a defensive perimeter around the remaining tanks and passed the ‘mot d’ordre. Ils ne passeront pas’.

A fierce German counter-attack supported by tanks developed almost immediately. Captain Triquet, ignoring the heavy fire, was everywhere encouraging his men and directing the defence and by using whatever weapons were to hand personally accounted for several of the enemy. This and subsequent attacks were beaten off with heavy losses and Captain Triquet and his small force held out against overwhelming odds until the remainder of the battalion took Casa Berardi and relieved them the next day.

Throughout the whole of this engagement Captain Triquet showed the most magnificent courage and cheerfulness under heavy fire. Wherever the action was hottest he was to be seen shouting encouragement to his men and organizing the defence. His utter disregard of danger, his cheerfulness and tireless devotion to duty were a constant source of inspiration to them. His tactical skill and superb leadership enabled them, although reduced by casualties to a mere handful, to continue their advance against bitter resistance and to hold their gains against determined counter-attacks. It was due to him that Casa Berardi was captured and the way opened for the attack on the vital road junction.”