As stated in the following London Gazette citation, Robert Spall is a recipient of the Victoria Cross. This medal is awarded for the most conspicuous bravery, a daring or pre-eminent act of valour, or self-sacrifice or extreme devotion to duty in the presence of the enemy. 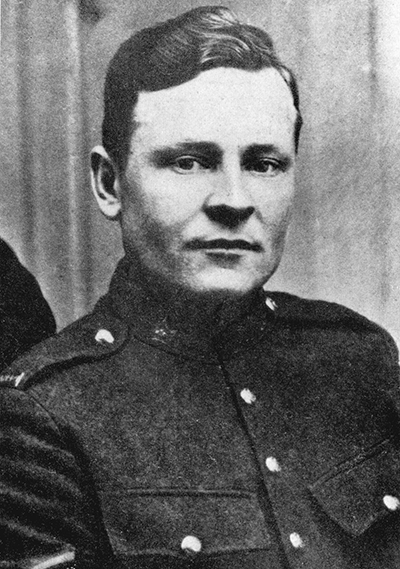 Robert Spall was born in Ealing, England, on 5 March 1890. At the age of two, he moved with his parents to Canada and lived in Winnipeg. In August 1915 he joined the 90th Infantry Battalion, Canadian Expeditionary Force, and later was posted to Princess Patricia’s Canadian Light Infantry in which he became a sergeant.

Spall earned the Victoria Cross in Parvillers, France, 12 and 13 August 1918 during an enemy counter-attack, when his platoon became isolated. Taking a Lewis gun, he inflicted numerous casualties, then descended into the trench and directed his men into a sap seventy-five metres from the enemy. He again mounted the parapet of the trench and resumed his fire in order to further hold up the enemy. It was at this point that he was killed; Spall sacrificed his life in order to extricate his platoon from a difficult situation, and his bravery allowed his men to be saved.

“For most conspicuous bravery and self-sacrifice when, during an enemy counter-attack, his platoon was isolated. Thereupon Sjt. Spall took a Lewis gun and, standing on the parapet, fired upon the advancing enemy, inflicting very severe casualties. He then came down the trench directing the men into a sap seventy-five yards from the enemy. Picking up another Lewis gun, this gallant N.C.O. again climbed the parapet, and by his fire held up the enemy. It was while holding up the enemy at this point that he was killed.

Sjt. Spall deliberately gave his life in order to extricate his platoon from a most difficult situation, and it was owing to his bravery that the platoon was saved.”