As stated in the following London Gazette citation, Walter Leigh Rayfield is a recipient of the Victoria Cross. This medal is awarded for the most conspicuous bravery, a daring or pre-eminent act of valour, or self-sacrifice or extreme devotion to duty in the presence of the enemy. 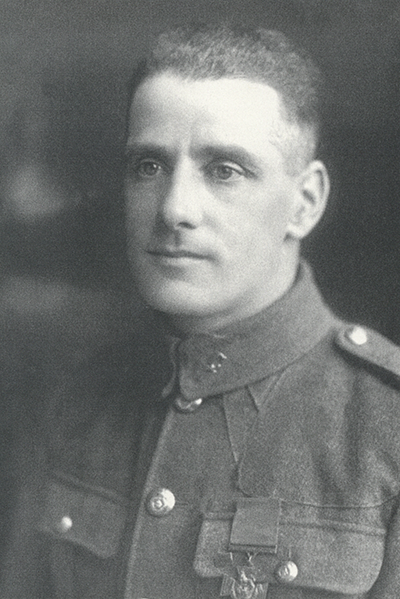 Walter Leigh Rayfield was born in Richmond-on-Thames, England on 7 October 1881 and later came to Canada. When the First World War began, he was living in Vancouver, British Columbia. Subsequently, Rayfield enlisted in the 7th Infantry Battalion, Canadian Expeditionary Force.

Rayfield was awarded the Victoria Cross for three acts of bravery while he was serving near Cagnicourt in France between 2 and 4 September 1918. On the first occasion, Rayfield rushed ahead of his company to attack a German trench, bayoneting two of the enemy and taking ten others captive. Later, he located and engaged a German sniper, finally charging the marksman’s section of trench so aggressively that thirty more enemy soldiers surrendered. Rayfield’s third courageous act was to leave cover and carry a badly wounded comrade to safety through heavy machine gun fire. As well as receiving the Victoria Cross, he was made a member of the Royal Order of the Crown of Belgium by the Belgian government.

“For most conspicuous bravery, devotion to duty, and initiative during the operations east of Arras from 2nd to 4th September, 1918.

Ahead of his company, he rushed a trench occupied by a large party of the enemy, personally bayoneting two and taking ten prisoners.

Later, he located and engaged with great skill, under constant rifle fire, an enemy sniper who was causing many casualties. He then rushed the section of trench from which the sniper had been operating, and so demoralised the enemy by his coolness and daring that thirty others surrendered to him.

Again, regardless of his personal safety, he left cover under heavy machine-gun fire and carried in a badly wounded comrade.

His indomitable courage, cool foresight, and daring reconnaissance were invaluable to his Company Commander and an inspiration to all ranks.”