As stated in the following London Gazette citation, William Hew Clark-Kennedy is a recipient of the Victoria Cross. This medal is awarded for the most conspicuous bravery, a daring or pre-eminent act of valour, or self-sacrifice or extreme devotion to duty in the presence of the enemy. 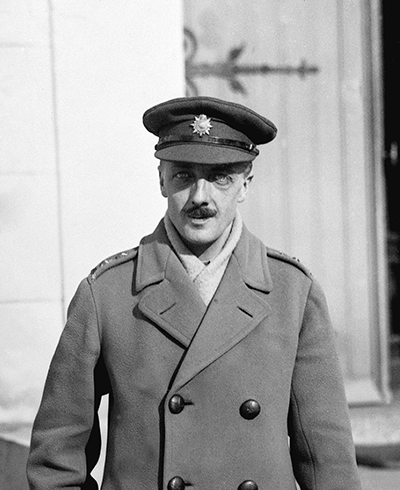 William Hew Clark-Kennedy was born in Dunskay, Scotland on 3 March 1880. After service with the British Army in the South African War, he came to Canada in 1902.

Clark-Kennedy joined the Royal Highlanders of Canada in 1914, and during the First World War rose to command the 24th Infantry Battalion, Canadian Expeditionary Force. Lieutenant-Colonel Clarke-Kennedy was four times mentioned in dispatches, received the Distinguished Service Order and bar, was made a Companion of the Order of St Michael & St George, and was awarded the Croix de Guerre by France.

Lieutenant-Colonel Clark-Kennedy received the Victoria Cross for his conduct in the Battle of Arras on 27 and 28 August 1918. Over the course of those two days, his battalion suffered numerous casualties near Wancourt in France as it strove to advance through heavy artillery and machine gun fire. In the face of such strong enemy resistance, Clark-Kennedy led his men forward to eliminate machine gun positions preventing the progress of the offensive.

This enabled the entire brigade to reach the Fresnes-Rouvray line. Though wounded, Lieutenant-Colonel Clark-Kennedy remained in command of his battalion until its objective was consolidated.

“For most conspicuous bravery, initiative and skilful leading on the 27th and 28th August, 1918, when in command of his battalion.

On the 27th he led his battalion with great bravery and skill from Crow and Aigrette trenches in front of Wancourt to the attack on the Fresnes-Rouvroy line. From the outset the brigade, of which the 24th Battalion was a central unit, came under very heavy shell and machine-gun fire, suffering many casualties, especially amongst leaders. Units became partially disorganised and the advance was checked. Appreciating the vital importance to the brigade front of a lead by the centre, and undismayed by annihilating fire, Lt.-Col. Clark-Kennedy, by sheer personality and initiative, inspired his men and led them forward. On several occasions he set an outstanding example by leading parties straight at the machine-gun nests which were holding up the advance and overcame these obstacles.

By controlling the direction of neighbouring units and collecting men who had lost their leaders, he rendered valuable services in strengthening the line, and enabled the whole brigade front to move forward.

By the afternoon, very largely due to the determined leadership of this officer and disregard for his own life, his battalion, despite heavy losses, has made good the maze of trenches west of Cherisy and Cherisy Village, had crossed the Sensee Rivert bed, and had occupied Occident Trench in front of the heavy wire of the Fresnes-Rouvroy line; under continuous fire he then went up and down his line until far into the night, improving the position, giving wonderful encouragement to his men, and sent back very clear reports.

On the next day he again showed valorous leadership in the attack on the Fresnes-Rouvroy line and Upton Wood. Though severely wounded soon after the start he refused aid, and dragged himself to a shell-hole, from which he could observe. Realising that his exhausted troops could advance no further he established a strong line of defence and thereby prevented the loss of most important ground. Despite intense pain and serious loss of blood he refused to be evacuated for over five hours, by which time he had established the line in a position from which it was possible for the relieving troops to continue the advance.

It is impossible to overestimate the results achieved by the valour and leadership of this officer.”