A battle honour formally entitled the “Battle of Frezenberg Ridge” and itself being part of “The Battles of Ypres, 1915.Footnote 1

The Honour “Frezenberg” was awarded to 66 British units and one Canadian battalion, the Princess Patricia’s Canadian Light Infantry, for their defence of positions preventing a German attack from gaining the ground east of Ypres. Following the battles of St-Julien, the British Expeditionary Force in the Ypres salient withdrew, on 3-4 May, to better positions defending Ypres. The Princess Patricia’s Canadian Light Infantry (PPCLI), part of the 27th British Division’s 80th Brigade, moved to positions along Bellewaarde Ridge a few hundred metres west of Frezenberg. On 8 May, a violent German bombardment launched a German attack between Mouse Trap Farm, just north of Wieltje, and Frezenberg. Six German divisions attacked the 27th Division and the 28th on its left. The Patricia’s held the far left flank of the 27th Division and were closest to the heaviest portion of the German attack that fell on the 28th Division in front of Frezenberg. The 28th Division successfully repulsed two German assaults before the third assault overwhelmed its defences. The initial German barrage that opened the attack caused several casualties among the Patricia’s, wiping out several of their machine gun positions. The battalion called forward all of its men, including orderlies, batmen, and signallers, to help with the defence. The Patricia’s open left flank faced a German assault that was trying to roll up the flank of the Division. They fought back repeated German assaults on their positions with rifle fire until, having suffered almost 400 casualties during that day’s fighting, reinforcements from the reserve battalions of the 80th and 81st Brigades arrived in late afternoon. When fully relieved just before midnight on that same day their strength was down to 4 officers and 150 men. 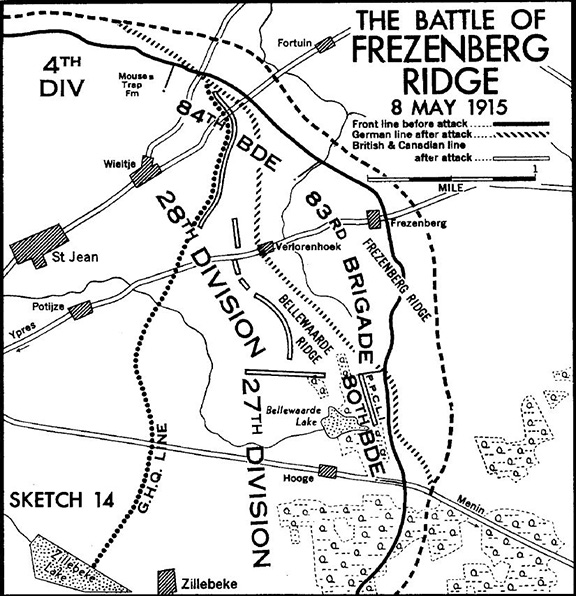 GO 7/28; United Kingdom, War Office, The Official Names of the Battles and Other Engagements fought by the Military Forces of the British Empire during the Great War, 1914-1919, and the Third Afghan War, 1919: Report of the Battles Nomenclature Committee as Approved by the Army Council (London, 1922), p.14