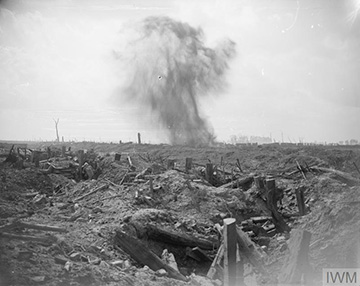 Battle of Langemarck. Shell bursting in the ruins of Boezinge Station. The remains of a train can be seen in the distance. In the foreground, a smashed up trench in the revetting of which railway sleepers were used, 17 August 1917.
Credit: Imperial War Museum (Q 5890) Photographer by Brooke, John Warwick (Lieutenant)

A battle honour formally entitled “Battle of Langemarck, 1917” and itself forming part of “The Battles of Ypres, 1917”.Footnote 1

The Honour “Langemarck, 1917” was awarded for the mid-August attack north of St Julien in Flanders. The aim was to increase the gains made at the beginning of August and to continue to push the Germans towards Passchendaele Ridge. Only slight gains were made, however, with troops reaching the outskirts of the ruined village of Langemarck. The attack was made difficult due to the wet weather that slowed the advance of the infantry. Involvement of Canadian troops was limited to the '2nd Battalion, Canadian Railway Troops, CEF and a Pioneer Battalion. The Royal Newfoundland Regiment was involved in the fighting as part of the British 29th Division. Over a period of three hours the battalion incurred 103 casualties, 27 of them being fatal, in its advance of 1,000 yards to the west of the village.