A battle honour formally entitled the “Battle of St. Quentin” and itself being part of “The First Battles of the Somme, 1918”.Footnote 1

The Honour “St. Quentin” was awarded as a Campaign Honour for the defence against the German Spring offensive in this region. Launched on 21 March, the German offensive named “Operation Michael” was intended to knock the British out of the war before American forces could arrive in large numbers. Using infiltration tactics the German attack was planned and rehearsed starting in January. Although the British forces in the area had attempted to adopt a form of elastic defence there were insufficient numbers to resist the German assault. Over the next few weeks the Germans penetrated some 40 miles into the British lines. Various formations were moved in to attempt to stop the Germans. The Canadian Cavalry Brigade (Brigadier-General J.E.B. Seely) was the first Canadian formation called into action playing a part in stopping the German advance. Serving as a component of the 3rd Cavalry Division they were the Fifth (British) Army's strategic reserve. The cavalry was dismounted and formed into a composite battalion. They were to fight as such for the next six days until they were eventually remounted.

In February 1918, prior to the opening of the German campaign, Canadian railway troops, such as the 2nd Battalion Canadian Railway Troops (formerly the 127th Battalion, CEF) and the 6th Canadian Railway Battalion (formerly the 228th Battalion, CEF) had been dispatched to the Fifth Army rear areas to construct a light rail system to better serve the front line. The enemy threat was such that these hitherto unarmed units were issued with and practised on, service rifles. When the storm broke on 21 March 1918 these railway construction battalions became, in a few instances, the only organized and cohesive military units in the rear areas. The 2nd Battalion was deployed in the line as infantry for a period of 72 hours suffering 29 casualties including 2 killed. All of the Railway Construction units continued in their duties under enemy shell fire and air attack until withdrawn. 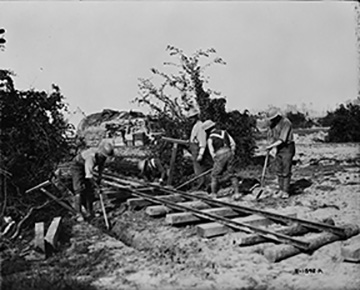 Unit on the Supplementary Order of Battle