The official lineage of The Calgary Highlanders infantry regiment. 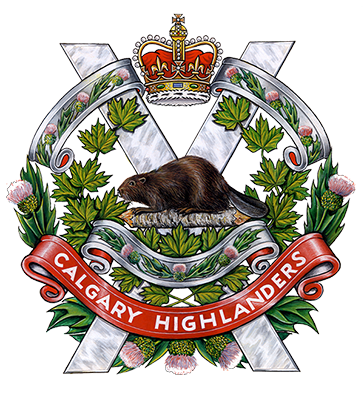 Colonel-in-Chief: Her Majesty The Queen

A beaver couchant on a log environed by a wreath of maple leaves, in chief the Royal Crown proper flanked by two scrolls Argent each bearing a frieze of thistles proper, overall in base a like scroll above a scroll Gules inscribed CALGARY HIGHLANDERS in letters Argent, all surmounting a saltire Argent on a spray of thistles in base proper.

The maple leaves and beaver represent service to Canada, and the Crown, service to the Sovereign. The beaver upon a log within two sprays of maple leaves surmounted by the Crown was adapted from the badge of the 10th Battalion, Canadian Expeditionary Force, 1914-1920. The thistles (the national flower of Scotland) and the saltire or cross of St. Andrew (the patron saint of Scotland) are common devices among badges of highland infantry regiments. "CALGARY HIGHLANDERS" is a form of the regimental title.

The Highland Laddie; and Blue Bonnets Over the Border

The Royal Regiment of Scotland 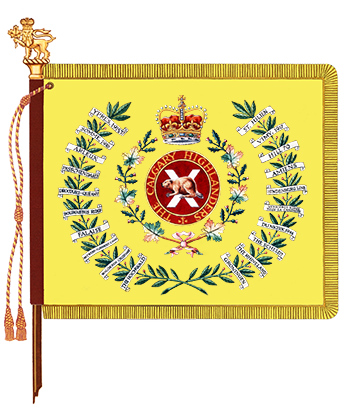 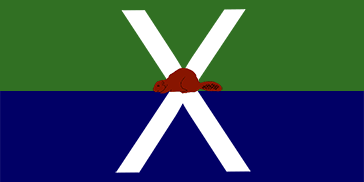 The Calgary Regiment was disbanded for the purpose of reorganization on 3 January 1921 and reorganized the same day (GO 65/21). This change was administrative and does not affect the lineage of the regiment.

Details of the 103rd Regiment "Calgary Rifles" were placed on active service on 6 August 1914 for local protection duties.Footnote 6

The 10th Battalion, which was authorized on 10 August 1914 as the '10th Battalion, CEF',Footnote 7 embarked for Britain on 29 September 1914.Footnote 8 It disembarked in France on 14 February 1915, where it fought as part of the 2nd Infantry Brigade, 1st Canadian Division in France and Flanders until the end of the war.Footnote 9 The battalion was disbanded on 30 August 1920.Footnote 10

The 56th Battalion, which was authorized on 7 November 1914 as the '56th Battalion, CEF,Footnote 11 embarked for Britain on 20 March 1916.Footnote 12 It provided reinforcements for the Canadian Corps in the field until 6 July 1916, when its personnel were absorbed by the '9th Reserve Battalion, CEF'.Footnote 13 The battalion was disbanded on 15 September 1917.Footnote 14

The 82nd Battalion, which was authorized on 10 July 1915 as the '82nd "Overseas" Battalion', CEF,Footnote 15 embarked for Britain on 20 May 1916.Footnote 16 It provided reinforcements for the Canadian Corps in the field until 18 July 1916, when its personnel were absorbed by the '9th Reserve Battalion, CEF'.Footnote 17 The battalion was disbanded on 21 May 1917.Footnote 18

The regiment mobilized 'The Calgary Highlanders, CASF' for active service on 1 September 1939.Footnote 19 It was redesignated the '1st Battalion, The Calgary Highlanders, CASF' on 7 November 1940.Footnote 20 On 27 August 1940, it embarked for Britain.Footnote 21 The battalion's mortar platoon took part in the raid on Dieppe on 19 August 1942, and on 6 July 1944, the battalion landed in France as part of the 5th Infantry Brigade, 2nd Canadian Infantry Division, and it continued to fight in North-West Europe until the end of the war.Footnote 22 The overseas battalion was disbanded on 15 December 1945.Footnote 23