The Navy's role at sea and on shore. Part 1 of this second volume covers the first half of the Second World War. It includes action at sea, on bases and in shipbuilding. 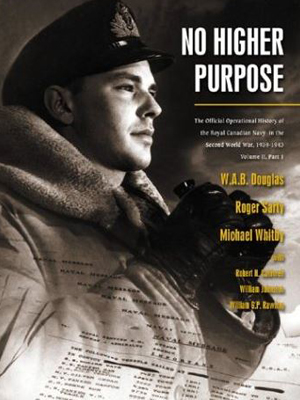 No higher purpose: the official operational history of the Royal Canadian Navy in the Second World War, 1943-1945, volume II, part 1

In April 1943, the Royal Canadian Navy assumed responsibility for Canadian Northwest Atlantic Command, the only operational area to be run by a Canadian Commander-in-Chief during the Second World War. No Higher Purpose, Part 1 of the Official Operational History of the RCN in the Second World War, describes the RCN's long, challenging journey from the outbreak of the war in September 1939 to the momentous events of Spring 1943.

Based upon extensive research in Canadian, British, American and German archives, No Higher Purpose describes the mobilization of the naval service during the first half of the war, measures its response to the demanding, ever-changing strategic situations that confronted the Allies, and analyses the service of our ships and sailors on the North Atlantic, Pacific and Mediterranean seas as well as the defence of Canadian waters.

With the main focus on the Battle of the Atlantic, this important and well-illustrated history demonstrates how Canadian naval forces proved indispensable to victory in that most critical campaign of the Second World War.