This page features an inventory of all buildings owned by the Department of National Defence (DND), as well as those buildings with a lease that DND manages. The building inventory indicates which structures contain asbestos as of September 30, 2019. It also indicates where asbestos management plans are in place.

To find out whether there is a known presence of asbestos in DND buildings, locate the building in the inventory below. You can search by entering key words in the “Filter items” box. You can also sort certain columns to locate a building by its Directory of Federal Real Property (DFRP) unique number, region, asset name, city, province or territory, postal code or asset type. 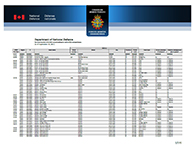 How the Government of Canada manages asbestos in its buildings

For most of the 20th century, asbestos was commonly used in both residential and commercial building products. Asbestos is a mineral that can be crumbled, pulverized or powdered when it is dry (friable) and will result in small fibres and clumps of fibres being released into the air. For more information on asbestos, please visit Health Canada’s website.

Non-friable asbestos has been used in limited applications by the Government of Canada and the construction industry in North America. The National Building Code permits the use of non-friable asbestos (not easily broken or able to crumble into pieces) and can be used in limited applications like resilient flooring, fire retardant boards, and for some piping.

Currently, the Department of National Defence follows the statements of the Asbestos Management Directive.