The Canadian Armed Forces have supported peace and stability in Mali via Op PRESENCE since 2018.

How many people are deployed?

The number of deployed personnel varies depending on the requirements of the mission.

The Tactical Airlift Detachment consists of one CC-130J Hercules aircraft, operated and supported by approximately 25 CAF members. It deploys for  multiple episodes several times per year to assist with transporting troops, equipment and supplies to the UN Organization Stabilization Mission in the Democratic Republic of the Congo (MONUSCO) and the UN Mission in South Sudan (UNMISS).

What are they doing?

The CAF is supporting UN needs to sustain its missions with the CAF delivering critical resources to military and police personnel as well as civilian staff on peace support operations in multiple locations across the African continent.

History and context of the operation

During the UN Peacekeeping Defence Ministerial in Vancouver in November 2017, Prime Minister Trudeau announced Canada’s intention to increase support for UN peacekeeping. This announcement included the launch of the Vancouver Principles on Peacekeeping and the Prevention of the Recruitment and Use of Child Soldiers, as well as the Elsie Initiative on Women in Peace Operations.

At the urgent request of the UN, deploying aeromedical evacuation assistance to Mali became Canada’s first priority. As such, the Canadian Armed Forces (CAF) devoted time and resources to deploying and employing a highly effective Air Task Force in support of MINUSMA as part of Operation PRESENCE - Mali. Having responded immediately with this first pledge, the CAF’s focus shifted immediately to planning the pledged tactical airlift support.

Operation PRESENCE – Uganda is the provision of that tactical airlift support via the Regional Support Centre in Entebbe, Uganda, to UN peacekeeping operations in Africa and is an important part of Canada’s commitment to making valuable contributions to UN peace support operations on the continent.

Operation PRESENCE – Training Support to Peace Operations (TSPO) is episodic training support supplied by the CAF to assist the UN’s Engagement Platoon Initiative. The Canadian contingent is responsible for the Engagement Platoon Pilot Course and Infantry Battalion Specialty Training Material. The UN Engagement Platoon’s mission is to enhance the situational awareness of the UN infantry battalion by mapping the demography of the area of operations in order to identify vulnerable area and at-risk populations. The first deployment is to Kigali, Rwanda, and Entebbe, Uganda.

Additional courses and the designated nations and locations involved are still to be determined.

The CAF has a history of deploying around the world in peacetime and during conflicts. In line with “Strong, Secure, Engaged,” Canada’s Defence Policy, and their commitment to UN Peacekeeping they help keep regions secure and defend Allies and partners if needed. 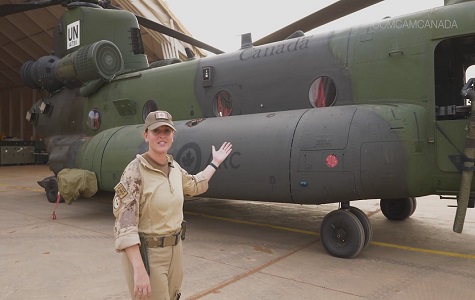 Maintaining an Aircraft in Mali

Canada's Defence Policy – Strong, Secure, Engaged Royal Canadian Air Force Aircraft Vancouver Principles on Peacekeeping and the Prevention of the Recruitment and Use of Child Soldiers