The Program for Regional and International Shorebird Monitoring (PRISM) was designed by biologists and researchers from the Canadian and United States Governments (Canadian Wildlife Service, U.S. Geological Survey and U.S. Fish and Wildlife Service) to address concerns about shorebird population declines first noted on migration surveys. It is estimated that of the 21 species that breed in the Canadian Arctic (Table 1), 13 are experiencing declining population trends (see Status of Birds in Canada), 90% of which have a Canadian Responsibility score of ­Moderate, High or Very High. Several of these shorebird species have already been listed by the Committee on the Status of Endangered Wildlife in Canada (COSEWIC) or the Species at Risk Act, or are being assessed for listing.

Shorebird species that breed in the arctic

In order to set population targets and understand the conservation and management concerns needed to ensure Arctic-breeding shorebird populations are healthy, we must know how many shorebirds are actually present to start with, and how critical their population declines are. To address this crucial information gap, the overall PRISM consists of four survey components: (1) Arctic breeding, (2) Migration, (3) Neotropical and (4) Tropical surveys. Although all four survey components have been started, the Arctic breeding survey component (called Arctic PRISM) is by far the most advanced in terms of methodology (both of surveys and statistics) and data collection. It is designed to address all of the PRISM goals except Goal 3. The goals of PRISM are to:

Tier 1 is rapid surveys conducted at a large number of sites over a ~20 year interval to get statistically-rigorous, accurate, survey-based, species-specific population estimates for Arctic-breeding shorebirds (PRISM Goal 1). Ideally the Tier 1 surveys will be repeated after the first round of surveys to calculate much-needed shorebird population trends (PRISM Goal 2). The compilation of the Ecosystem Status and Trends Report by the Federal, Provincial and Territorial Governments of Canada highlights the need to fill important gaps in our knowledge of shorebird population sizes and trends for shorebirds that breed in Bird Conservation Region (BCR) 3 (Arctic).

Tier 2 is intensive surveys at a smaller number of sites located in areas with known concentrations of shorebirds. The data collected at these long-term study sites provides annual information on the breeding biology of shorebirds that cannot be captured during the Tier 1 surveys, and provides a shorter-term assessment of site-specific population trends (PRISM Goal 3). These Tier 2 sites are also part of the Arctic Shorebird Demographic Network, which is a network of field sites across Alaska and Canada focused on investigating the impacts of environmental change on the demography (characteristics of a population, e.g. nest success, adult survival, sex ratios, etc.) of migratory shorebirds in the arctic.

The data we are collecting during the Arctic PRISM surveys is some of the first bird and habitat data ever collected in many areas of the Arctic. The data is increasingly important given our need to determine the effect(s) of climate change on Arctic species and the environment as a whole, as it provides a much needed baseline for Arctic habitat data. Arctic PRISM also collects data on all species of birds, many of which are currently not monitored in the Arctic including songbirds such as Snow Bunting, Lapland Longspur, Hoary Redpoll and Savannah Sparrow and waterbirds such as Sabine's Gull, Arctic Tern, Red-throated Loon and Pacific Loon.

While the majority of the work is done by professional biologists, Arctic PRISM has also benefited from many volunteers, summer students and northern community field assistants over the years. If you are interested in participating as part of the Arctic PRISM survey team, please contact us directly, or visit Environment and Climate Change Canada's bird survey volunteer pages to see other exciting opportunities for volunteer participation.

The North American Arctic has been divided into 20 Arctic PRISM regions (13 in Canada, 7 in Alaska) (Figure 1). Arctic PRISM surveys began in 2002. The U.S. finished their portion of the surveys in 2007. In Canada, the Canadian Wildlife Service has completed four of our 13 regions and started surveys in another six. We have also designated two Tier 2 sites in Canada (East Bay, Southampton Island, NU and Kendall Island Bird Sanctuary, Mackenzie Delta, NT) (Figure 2).

Region numbers and names for figure 1 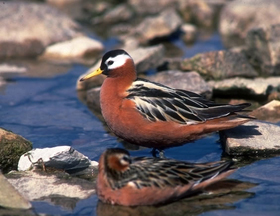 To aid in the collection of baseline and cumulative impact monitoring data, we strongly encourage proponents of projects within BCR 3 in the Northwest Territories and Nunavut to use the Arctic PRISM protocol for surveys of shorebirds, landbirds and inland waterbirds. Assistance in modifying the Arctic PRISM program to match the needs of a proponent's specific monitoring goals is available.

Arctic shorebirds in North America: a decade of monitoring, Bart and Johnston (editors)

A book of the results of the Arctic PRISM (1998-2008) is available through the Studies in Avian Biology monograph series via the University of California Press in hardcover and e-book format. 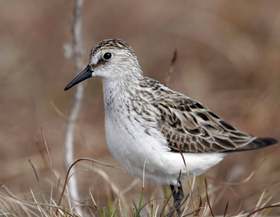 Abstract. Shorebirds in the arctic regions of North America were studied for more than a decade using rigorous, standardized surveys to estimate densities and population size and to explore distribution and habitat relationships. Field work was conducted from the Aleutian Islands, Alaska to Baffin Island, Nunavut and south to Québec. In each region, a large sample of plots was surveyed using a rapid method and a subset of these plots was studied intensively to estimate detection rates on the rapid surveys. A total of 1,554 rapid plots, covering 232 km², and 83 intensive plots were surveyed during the study. The monograph presents more than 600 density estimates and more than 200 estimated population sizes. Densities for all shorebirds combined were highest in the Yukon-Kuskokwim Delta and next highest on the Alaska Peninsula and the National Petroleum Reserve in Alaska (NPRA). They were lower in eastern Alaska and most of Canada but were high in the Foxe Basin including Southampton, Coats, Prince Charles, and Air Force Islands. Although densities were highest in wetlands, wetlands only contained about 45% of the shorebirds in our study area, and uplands, in which densities were generally very low, contained an estimated 27% of the total population. The methods are suitable for many other studies in which cryptic species must be surveyed across large landscapes.

There are 3 ways to contact us about the Arctic Program for Regional and International Shorebird Monitoring: