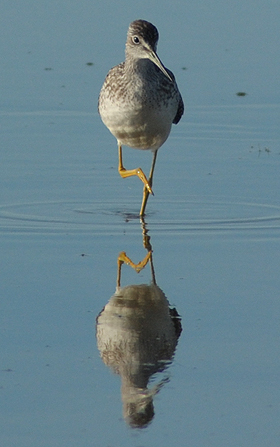 The Ontario Shorebird Survey (OSS) was developed by Environment and Climate Change Canada's Canadian Wildlife Service in 1974 to better understand the timing and size of the shorebird migration and to identify important areas used by these birds during spring and fall migration. More recently, the data collected by the survey has been used to estimate trends in shorebird populations. Volunteers are vital to the ongoing implementation of the OSS.

The OSS is the only inland shorebird survey in Canada and is part of a network of regional surveys, including the Atlantic Canada Shorebird Survey and the International Shorebird Survey, all of which share a common goal: to use the best available knowledge in order to conserve shorebird populations.

In much of North America, shorebird surveys are designed so that observers choose pre-determined local sites that are easily accessible, and monitor these areas during shorebird migration. In more remote northern areas, aerial surveys are conducted and temporary remote camps are established to monitor shorebirds during southbound migration. OSS sites are primarily situated in southern Ontario (Figure 1).

In the early days of the program, the survey consisted of a coordinated series of counts carried out at a small number of sites, but since then over 110 observers have collected data from more than 250 sites across Ontario. Today, regular data collection at about 20 OSS sites is coordinated by Environment and Climate Change Canada's Canadian Wildlife Service as a volunteer-based survey that continues to rely on the skills, dedication and long-term support of birders throughout Ontario.

Based on the analysis of shorebird migration data (1974-2009) representing over 40 shorebird species (Table 1), it is estimated that of the 19 taxa for which trends were generated, 17 are experiencing declining population trends (Ross et al. 2012; Status of Birds in Canada). Several of these shorebird species have been assessed by COSEWIC and are listed under the Species at Risk Act. 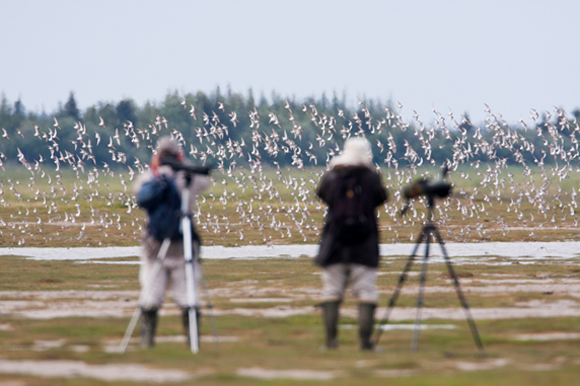 OSS volunteers enjoy bird watching but also understand the importance of following a survey protocol to collect information that can be used to help better understand and conserve birds. Skill levels vary and new observers are provided with tools and support to help identify and census shorebird species.

Traditional OSS sites are portions of beaches, freshwater marshes, sewage lagoons, or fields. In an effort to expand the scope of the survey, new sites can be selected by observers with the help of the OSS coordinator. Together these sites will provide us with the data we need to assess population trends and habitat use of shorebirds that migrate through Ontario. 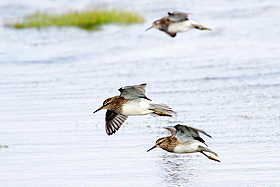 OSS sites are surveyed annually between April 20 - June 10 and July 20 - November 1. During these periods, volunteers visit their site once every 10 days to identify and count all shorebirds observed. In general, the more counts undertaken at a site, and the longer the record of years, the more valuable these data become for shorebird population assessments and guiding conservation efforts.

At the end of the field season, OSS data are sent to the OSS coordinator or uploaded via an online data entry portal. The OSS database can be accessed by Environment and Climate Change Canada, provincial governments, academics, students, NGOs and other interested groups for use in research and conservation.

Follow the link for the data sheets, guidelines and information you need to get started, or contact us and we can provide these to you.