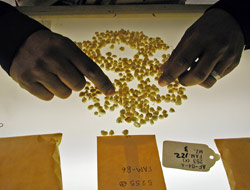 Biodiversity - species and the genes they contain - provides a lot of the medicines used today and that people will depend on in future. Of the top 150 prescription drugs, 118 came from living creatures, mostly plants. Approximately 80% of the global population relies on plant-based medicines for primary health care. Multi-national biotechnology companies have recognized these values and are bioprospecting in Canada and around the world for genetic material used in health care and life sciences but also in agriculture, in cosmetics or in horticulture.

In light of growing scientific and commercial interest in genetic resources, the serious threats facing global biodiversity and building on the third objective of the Convention on Biological diversity and its relevant articles, countries of the world, including Canada, have started to look at the best ways to increase their capacity to manage the access to genetic resources found on their territory and benefit from the use of these resources. This is what is often referred to as Access and Benefit-sharing (ABS).

ABS is embodied in the Convention on Biological Diversity (CBD) which was signed by Canada in 1992 and entered into force the following year. Article 15 of the CBD addresses the key terms and conditions for ABS. Firstly, it provides that access to genetic resources shall be subject to the prior informed consent (PIC) of the Contracting Party providing such resources. This means that permission should be given before a genetic resource is accessed.

Article 15 also provides that access shall be based on mutually agreed terms (MAT) in order to ensure the sharing of benefits arising from the commercial or other utilization of these genetic resources with the Contracting Party providing such resources. This means that agreement on the terms for the use and the sharing of benefits should be reached between the user and the provider of a genetic resource.

Access and Benefit-sharing is also closely linked to the traditional knowledge of indigenous and local communities who use genetic resources present on the lands they inhabit for purposes like, for example, traditional medicine. The CBD recognizes the need to protect this knowledge in Article 8(j) and encourages the equitable sharing of the benefits arising from the use of such knowledge.

Recognizing the potential value of our genetic resources can help create an incentive to conserve them. In return, conservation efforts may contribute to maintaining Canada's genetic diversity and increase the chances that Canadian genetic resources be at the root of new products and technology developments.