Storm track information is posted by the Canadian Hurricane Centre (CHC) on the Canada.ca/weather website during the hurricane season (June 1st to November 30th) whenever there is a tropical or post-tropical cyclone in the Atlantic Ocean region.  Tracks are shown based on the following procedures:

When there are no active storms, the Canadian Hurricane Centre will still post the map indicating this, with a satellite image updated once or twice daily.

The forecast track map below provides an example of the kinds of information available on each map. 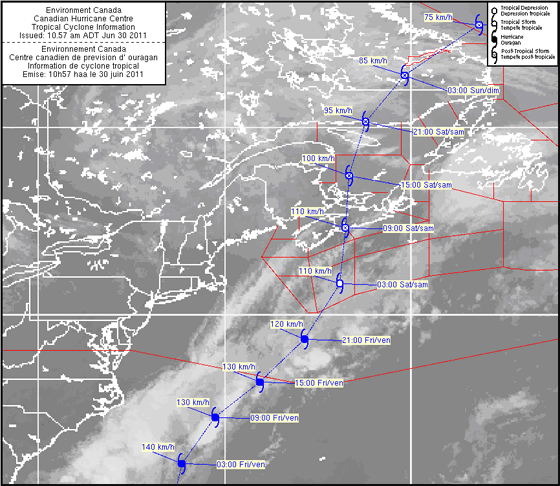 The label in the upper left corner of the map indicates the forecast issue date and time. In this case the track map was issued on June 30, 2011, at 10:57 a.m. ADT. The map can be issued in Eastern, Atlantic or Newfoundland time, depending on which region is being affected by a storm. The usual time used is Atlantic time.

The track positions on the map may be either 12 hours apart or 6 hours apart. The total forecast length may be as short as 12 hours or as long as 120 hours.