The Saint-Augustin Migratory Bird Sanctuary (MBS) lies along the south shore of Île de la Grande Passe in the Gulf of St. Lawrence, south of the community of Saint-Augustin on the Lower North Shore.

The sanctuary, which covers an area of 5369 hectares, was established in 1925 to protect a major seabird nesting site. Several dozen islands (excluding Île Kennedy), islets and rocks are within the MBS. In total, it spans nearly 13 km and includes all waters within its boundaries.

Importance of the Migratory Bird Sanctuary

The MBS supports seven key species of birds: Herring Gull, Common Eider, Black Guillemot, Great Black-backed Gull, Ring-billed Gull, Common Tern and Arctic Tern. The most common species is the Herring Gull. Despite a population boom, from 50 birds in 1925 to some 6200 in 1988, this species subsequently suffered a considerable decline, with only 1793 birds recorded in 2010.

Numbers of Black Guillemots were consistently recorded at 110 to 185 birds between 1935 and 1960. However, these numbers dropped rapidly thereafter, and only six individuals were observed in the MBS in 2010. 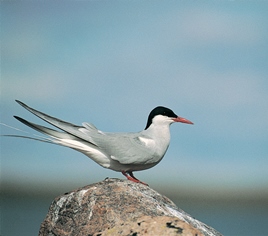 As for the Great Black-backed Gull, its population was plentiful in 1940, with up to 900 birds recorded, but subsequent surveys showed their numbers varying from only 40 to 320 individuals.

The population of Ring-billed Gulls is even more variable. Some years this species has been absent from the sanctuary, whereas other years their numbers have fluctuated between a few dozen to several hundred birds (the maximum number counted was 1300 in 1960). Only 216 birds were recorded in 2010.

According to previous inventories, Common and Arctic Terns were breeding in large numbers within the sanctuary. Four previous surveys set numbers at more than 600 birds (reaching a maximum of 1000 in 2005).

It should also be noted that Red-throated Loons were nesting in the MBS when inventories were carried out between 1925 and 1965. A maximum of 22 individuals were recorded in both 1940 and 1960. However, the last mention of this species nesting in the Saint-Augustin MBS dates back to 1982.

MBSs are established for the protection and conservation of migratory birds. Activities that could harm migratory birds, their nests or their eggs are prohibited.

MBSs can be and have been established on private, provincial, territorial and federally owned lands. Access to each MBS varies by site and is at the discretion of the landowner and land manager.

Access denial or restrictions imposed by the owners of land within the MBS may also apply.

For greater certainty, nothing in this document shall be construed so as to abrogate or derogate from the protection provided for existing Aboriginal or treaty rights of the Aboriginal peoples of Canada by the recognition and affirmation of those rights in section 35 of the Constitution Act, 1982.

This map is for illustrative purposes only and should not be used to define legal boundaries. Saint-Augustin Migratory Bird Sanctuary can also be viewed using Google Maps. Please note that the Google map is a complementary source of information and does not represent the official map or site name.