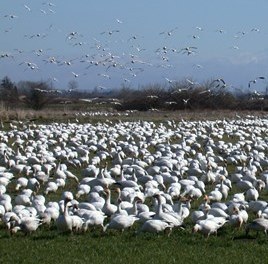 The NWA is part of the Fraser River delta, an area of roughly 67,000 hectares (ha) recognized as an internationally important migration stop-over and wintering area for a large number of migratory birds along the Pacific coast. Consisting of a mosaic of estuarine habitats, remnant wetlands, riparian forests, agricultural areas, and urbanized zones, the delta attracts up to 1.4 million birds from Siberia to South America each year. No other site in Canada supports such a diversity and number of birds in winter, and no comparable site exists along the Pacific coast between California and Alaska.

Alaksen NWA was established in 1972. Totaling 349 ha, Alaksen NWA mainly consists of four former deltaic islands which were joined together by causeways and dykes in the earlier part of the century. Alaksen NWA contains a microcosm of habitats and wildlife presently found on the Fraser River delta. The importance of Alaksen NWA for wildlife is also recognized by its designation as a globally significant Important Bird Area, and is also part of a Ramsar site, and a Western Shorebird Reserve Network site. A section of Alaksen NWA overlaps with the George C. Reifel Migratory Bird Sanctuary (MBS).

One of the most spectacular sights at the NWA is the occurrence of Snow Geese in concentrated flocks of numbers exceeding 25,000 beginning in October! They are particularly abundant in upland fields during high tide and inclement weather events. Similarly, flocks of 15,000 or more dabbling ducks are commonly seen making use of the NWA of which Wigeon, Mallard, Northern Pintail, and Teal are the most plentiful. The diversity of habitats that occur within the boundaries of the Alaksen NWA allow for a great variety of wildlife species which are not seen

More information is provided on Alaksen NWA in the summary table below.

A network of trails provides access for visitors to enjoy the variety and abundance of birds in both the sanctuary and the wildlife area. Walking, as well as wildlife and bird watching, are encouraged and interpretive programs are offered for groups of all ages by the British Columbia Waterfowl Society. 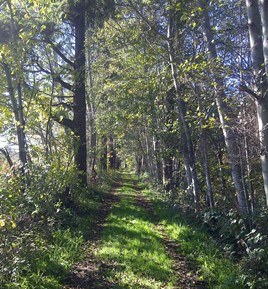 Note: Pets should not be brought to the sanctuary.

The Reifel Refuge portion of the George C. Reifel MBS is managed by the British Columbia Waterfowl Society under agreement with Environment and Climate Change Canada. and welcomes the public daily from 9 until 4. The rest of the Alaksen NWA is open from 8 until 4 Monday to Friday. Activities are permitted in accordance with the conservation objectives of the NWA management plan. Public notices listing the authorized activities in the wildlife area are posted at access points.

Agricultural activities are permitted here as per the management plan and are the main management tool used to provide high quality habitats for waterfowl while also preserving other types of habitat for the conservation of other wildlife.

Alaksen NWA overlaps with the George C Reifel Migratory Bird Sanctuary, which is currently the main area used by the public, and is located just under 10km west of Ladner in the Municipality of Delta, British Columbia (a suburb of Vancouver).

Follow Highway 99 south through the Massey Tunnel, exit onto Highway 17A southbound to Ladner Trunk Road (Highway 10). Follow Ladner Trunk Road west until it bears right and turns into 47A Avenue and then bears left and turns into River Road. Next, follow River Road westward for 3 km and cross the bridge to Westham Island. Follow Westham Island Road to where it ends. Here you can either:

More information on access and permitting for Alaksen NWA can be obtained by contacting the Environment and Climate Change Canada regional office.

This map is for illustrative purposes only and should not be used to define legal boundaries. Alaksen NWA can also be viewed using Google Maps. Please note that the Google map is a complementary source of information and does not represent the official map or site name.