Canadian Forces Base (CFB) Suffield National Wildlife Area (NWA) was established in 2003. It is 45,836 ha in area and is located within the CFB Suffield. CFB Suffield is one of the largest blocks of predominantly uncultivated grassland remaining in Prairie Canada - roughly half the size of Prince Edward Island. Due to its large size, expanse of undisturbed native prairie, and concentration of species at risk, CFB Suffield NWA is unique and nationally significant. It is the only NWA specifically affording protection at a scale large enough to achieve the survival and recovery of prairie grassland species that have been identified as species at risk. The establishment of the NWA recognized that native prairie grasslands were continuing to disappear at an alarming rate and that it was imperative to set aside a large block of habitat for local and regional benefit.

The Suffield NWA has long been recognized as ecologically unique and fragile by the military: the portion of CFB Suffield that constitutes the NWA has been environmentally protected since the Base was established in 1971 and is relatively undisturbed by military training activities. No ground training occurs within the NWA in order to protect the integrity of native grasslands and wildlife habitat. However, nearby military training, combined with past management strategies, have resulted in some changes in the fire regime in portions of the NWA. 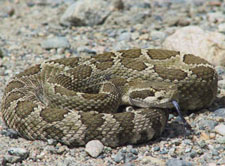 Habitats within the NWA include rolling native grasslands, extensive sand hills and sand dunes, deeply incised coulees, and the steep valley slopes carved by the South Saskatchewan River. Riparian sage flats and cottonwood forests occur in the valley bottom, and small wetlands and occasional springs are scattered throughout the NWA.

The large size, diverse habitats, extensive sand deposits, and position of the NWA near the northern edge of the dry mixed-grasslands make the area a refuge for a host of prairie wildlife. A diverse assemblage of plants, mammals, birds, reptiles, amphibians and insects - many of which have declined or completely disappeared elsewhere across the prairies in Canada, can be found in Suffield NWA. CFB Suffield is home to more than 1,100 known species, 20 of which are listed as species at risk in Canada.

Many of Suffield's species at risk are emblematic prairie species, such as the Burrowing Owl, the Ferruginous Hawk, and the Sprague's Pipit, that evoke images of vast expanses of unbroken native grasslands grazed by free-ranging herds of Bison. Others, like Small-flowered Sand-verbena and Ord's Kangaroo Rat are habitat specialists that require the open habitats and coarse soils of sand dunes and sand hills that are uncommon and found in very few places across the prairies. Specific climatic and fire regime conditions are required to maintain such habitats.

The large size of CFB Suffield NWA provides a rare opportunity to protect populations of unique and endangered prairie wildlife at a scale that is large enough to promote their recovery and ongoing persistence. Some, such as the prairie subspecies of Western Harvest Mouse, are not know to have viable populations elsewhere in the Canadian Prairies.

More information on CFB Suffield NWA is provided in the summary table below.

CFB Suffield NWA is managed under Delegation of Authority from Environment and Climate Change Canada by the Department of National Defence as part of the CFB Suffield. This unprecedented arrangement represented an exciting new method of protecting nationally significant wildlife habitat on Federal Lands in Canada. The Department of National Defence is working to develop a sustainability plan (Suffield Sustainability Management Plan) for all of CFB Suffield, including the NWA.

CFB Suffield NWA is protected and managed according to the Wildlife Area Regulations under the Canada Wildlife Act as well as the National Defence Act. The Wildlife Area Regulations outline specific prohibited activities (such as hunting, fishing, damaging or removing plants, agricultural and recreational activities, etc.) unless notices permitting specific activities are posted or a person has obtained a permit. For more information on authorizations and prohibited activities in NWAs, consult the NWAs Management and Activities section.

Like the Plains Bison, the dominant predators of the grassland ecosystem, the Prairie Grizzly Bear (extirpated) and the Grey Wolf (essentially eradicated) are no longer present in the ecosystem and the predator-prey dynamic is in an unnatural state. The absence of the single keystone herbivore and the dominant large predators has resulted in significant changes to the grazing regime, with unknown consequences.

The management of habitats to promote the recovery and enduring survival of Canada's species at risk is the primary management focus of the CFB Suffield NWA. For example, cattle grazing takes place on portions of the NWA as an important tool for management of native grasslands and wildlife that evolved in parallel with a keystone herbivore, the now extirpated Plains Bison. In areas of the NWA that are not grazed by cattle, ungulates such as Pronghorn, Mule Deer, and Elk are the dominant herbivores. Elk were intentionally reintroduced to CFB Suffield in 1997 and 1998 to partially fulfill the role of extirpated bison in the grassland ecosystem. Since the introductions, the population of elk has increased dramatically in the absence of predation; this population increase has led to some concerns for adjacent landowners and ranchers who suffer fence damage and feed losses from Elk that range beyond the Base. The Elk herd at CFB Suffield is managed as a provincial resource by Alberta Sustainable Resource Development in conjunction with the Department of National Defence.

Public access to the NWA is strictly prohibited by authority of the National Defence Act. However, management of the NWA allows for some permitted research and habitat management activities in accordance with the conservation objectives of the NWA management plan. No hunting is permitted on the Base for public safety reasons. For more information on permitting for CFB Suffield NWA, contact the Department of Defence, CFB Suffield, Range Sustainability Section

When the CFB Suffield NWA was formally established more than 1100 shallow gas wells, along with an associated pipeline network and other infrastructure, were already present within the NWA. The Province of Alberta owns the mineral rights underlying the NWA, while the federal government owns the surface rights. Agreements between Canada and Alberta to provide access to natural gas beneath Suffield were established in 1975 but as of 2012 have not yet been updated since the creation of the NWA or the passage of new legislation including the Canadian Environmental Assessment Act, the Species at Risk Act or the Alberta Environmental Protection and Enhancement Act.

A proposal to install an additional 1275 shallow gas wells within the NWA was filed by the EnCana Corporation in 2005. The proposal was referred to a Joint Review Panel under the Canadian Environmental Assessment Act (CEAA) due to the potential for significant environmental impact and a high level of public concern about the project. The recommendations of the Joint Review Panel relative to this proposal are available through the Canadian Environmental Assessment Registry.

On November 30th, 2012, Canada's Environment Minister Peter Kent announced that the Shallow Gas Infill Development Project proposed by Cenovus Energy at Canadian Forces Base Suffield NWA in Alberta will not be granted federal approval to proceed. The Government has decided that the significant adverse environmental effects that would be caused by the project are not justified in the circumstances. Today, the Government is issuing the first decision statement under the Canadian Environmental Assessment Act 2012.

This map is for illustrative purposes only and should not be used to define legal boundaries. Canadian Forces Base Suffield NWA can also be viewed using Google Maps. Please note that the Google map is a complementary source of information and does not represent the official map or site name.