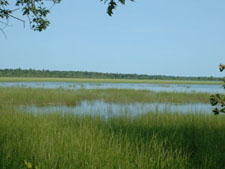 Mississippi Lake National Wildlife Area (NWA) covers an area of 307 hectares (ha) located within the wetlands of McEwen Bay, where water streams in from the Mississippi River. The Mississippi River runs northeast from the Kawartha Lakes into the Ottawa River near Arnprior, Ontario. The small bay is one of the few natural areas left on the Mississippi Lake shoreline. Muddy silt and debris support rich stands of wild rice, cattail and other plants, well sheltered by a peninsula and island at the mouth of the bay. The bay that collects the river silt provides lush stands of aquatic plants that feed thousands of migrating ducks each autumn. The Mississippi Lake NWA was first established as a Migratory Bird Sanctuary in 1959 to protect staging waterfowl, before becoming an NWA in 1971.

The west side of the bay is a recovering agricultural field. The open field, along with the wild rice, attracts thousands of grazing waterfowl every fall. Along the rest of the shoreline, aquatic plants give way to flooded scrub thickets. Rising up to the rolling terrain of the uplands are many types of wooded habitats, from woody swamps to hardwood forest dotted with limestone outcrops. The thousands of migrating waterfowl that use the lake during migration for staging (resting and feeding) take refuge in McEwen Bay. Many mammals, birds, reptiles, amphibians and invertebrates also take advantage of the plentiful habitats on the property. From spring through autumn, a large number of songbirds nest in the area or stop over during migration. In spring and summer, the marshes provide some of the best habitat for bullfrogs in the region. The bay is also an important fish nursery, the vegetation being used for spawning and shielding young fish.

Several endangered or threatened species, including the Monarch Butterfly (a species of special concern) are present within the NWA. The NWA also provides habitat to the Butternut tree, Barn Swallow, and Whip-poor-will, all of which are watch-list or listed species.

More information on Mississippi Lake NWA is provided in the summary table below.

Management Plan (PDF; 1.07 Mb) (HTML)
Comments on the proposed management plan can be directed to Environment and Climate Change Canada via PA-Consultations-AP@ec.gc.ca Email, by phone or in writing. Contact information is available here.
Consultation Period: November 21, 2014 to January 19, 2015 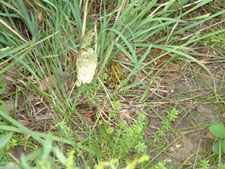 NWAs are protected and managed according to the Wildlife Area Regulations under the Canada Wildlife Act. The primary purpose of NWAs is the protection and conservation of wildlife and their habitat. For this purpose, and according to the legislation, Environment and Climate Change Canada can prohibit all activities in a NWA that could interfere with the conservation of wildlife. Consequently, most NWAs are not accessible to the public and all activities are prohibited. Nonetheless, Environment and Climate Change Canada has the ability to authorize some activities, whether through public notice or the issuance of permits, as long as these are consistent with the management plan goals for the NWA. For more information, consult the NWAs Management and Activities section.

Access to Mississippi Lake NWA is seasonally restricted and activities may be permitted in accordance with the conservation objectives of the NWA management plan. Public notices listing the authorized activities are posted at access points.

Access is permitted for day use only at the entrance on Drummond Concession 9A. Activities allowed include hiking, skiing, snowshoeing, picnicking and wildlife viewing on the designated trail. Facilities include a public parking lot, designated hiking trail, public boat launch, and washroom. Recreational boating (personal watercraft) and sport fishing (no lead sinkers) are permitted within the NWA from December 16th through September 14th, and are subject to federal and provincial regulations. Access to other parts of the NWA is restricted and requires a permit. All of these activities are prohibited from September 15th to December 15th when the only public access is via the boat launch on McIntyre Creek, to access Mississippi Lake.

More information on access and permitting for Mississippi Lake NWA can be obtained by contacting the Environment and Climate Change Canada regional office.

This map is for illustrative purposes only and should not be used to define legal boundaries. Mississippi Lake NWA can also be viewed using Google Maps. Please note that the Google map is a complementary source of information and does not represent the official map or site name.