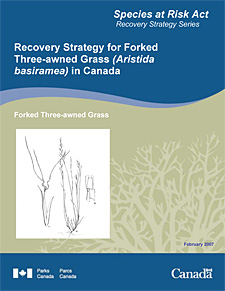 About the Species at Risk Act Recovery Strategy Series

In the context of species at risk conservation, recovery is the process by which the decline of an endangered, threatened or extirpated species is arrested or reversed, and threats are removed or reduced to improve the likelihood of the species’ persistence in the wild. A species will be considered recovered when its long-term persistence in the wild has been secured.

Recovery strategy development is a commitment of all provinces and territories and of three federal agencies -- Environment Canada, Parks Canada Agency and Fisheries and Oceans Canada -- under the Accord for the Protection of Species at Risk. Sections 37–46 of SARA (Species at Risk Act) spell out both the required content and the process for developing recovery strategies published in this series.

To learn more about the Species at Risk Act and recovery initiatives, please consult the SARA Public Registry and the website of the Recovery Secretariat (http://www.speciesatrisk.gc.ca/recovery/default_e.cfm).

You can download additional copies from the SARA Public Registry.

© Her Majesty the Queen in Right of Canada, represented by the Minister of the Environment, 2007. All rights reserved.

Content (excluding the illustrations) may be used without permission, with appropriate credit to the source.

The Strategy was prepared by Judith Jones, Winter Spider Eco-Consulting.

We would like to acknowledge the significant effort of the current and past members of the Forked Three-awned grass Recovery Team:

We would also like to thank the many individuals who provided information for and feedback on this document, especially Gary Allen, Wasyl Bakowsky, David Featherstone, Melvin King, Mike Penskar, Mike Oldham, and Beausoleil First Nation Chief Valerie Monague and her Council. Ms. Mona Ross, of Southern Illinois University Press, kindly provided permission to use the line drawing which occurs on the title page, from Dr. Robert Mohlenbrock’s Flora of Illinois, in perpetuity.

Under the Accord for the Protection of Species at Risk (1996), the federal, provincial, and territorial governments agreed to work together on legislation, programs, and policies to protect wildlife species at risk throughout Canada. The Species at Risk Act (S.C. 2002, c.29) (SARA) requires that federal competent ministers prepare recovery strategies for listed Extirpated, Endangered and Threatened species.

The Minister of the Environment presents this document as the recovery strategy for Forked Three-awned grass as required under SARA. It has been prepared in cooperation with the jurisdictions responsible for the species, as described in the Preface. The Minister invites other jurisdictions and organizations that may be involved in recovering the species to use this recovery strategy as advice to guide their actions.

The goals, objectives and recovery approaches identified in the strategy are based on the best existing knowledge and are subject to modifications resulting from new findings and revised objectives.

This recovery strategy will be the basis for one or more action plans that will provide further details regarding measures to be taken to support protection and recovery of the species. Success in the recovery of this species depends on the commitment and cooperation of many different constituencies that will be involved in implementing the actions identified in this strategy. In the spirit of the Accord for the Protection of Species at Risk, all Canadians are invited to join in supporting and implementing this strategy for the benefit of the species and of Canadian society as a whole. The Minister of the Environment will report on progress within five years.

The Species at Risk Act (SARA, Section 37) requires the competent minister to prepare recovery strategies for listed extirpated, endangered or threatened species. The Forked Three-awned Grass was listed as Endangered under SARA in January 2005. The Parks Canada Agency led the development of this Recovery Strategy. All other responsible jurisdictions reviewed and acknowledged receipt of the strategy (Beausoleil First Nation, the Canadian Wildlife Service, the Province of Québec, and the Province of Ontario). The proposed strategy meets SARA requirements in terms of content and process (Sections 39-41). It was developed in cooperation and consultation with the Canadian Wildlife Service (Ontario and Québec) and the Beausoleil First Nation.

A strategic environmental assessment (SEA) is conducted on all SARA recovery planning documents, in accordance with the Cabinet Directive on the Environmental Assessment of Policy, Plan and Program Proposals. The purpose of a SEA is to incorporate environmental considerations into the development of public policies, plans, and program proposals to support environmentally-sound decision making.

Recovery planning is intended to benefit species at risk and biodiversity in general. However, it is recognized that strategies may also inadvertently lead to environmental effects beyond the intended benefits.

Overall, this strategy will have positive effects not only on the target species but also on the environment as a whole. Establishing protected areas where Aristida basiramea is found will help protect most other species found on those lands. Increased education and awareness of landowners may also have an overall positive effect on the environment by increasing stewardship activities.

While this recovery strategy will clearly benefit the environment, several potentially adverse effects were also considered. The adverse environmental effects include:

The potential adverse environmental effects on non-target species during research and monitoring can be mitigated by determining exactly what other species are in the area and ensuring that any research and monitoring is done at times or in locations that will avoid or minimize disturbance to other sensitive species or their habitats. Annual burning could have adverse effects if conducted in areas where there are species sensitive to fire. If the habitat of the Christian Island population is to continue to be burned annually, then a determination of the other species occurring in this area should be completed to make certain that other non-target species are not adversely affected. Follow-up monitoring is recommended for any burning that is done to enhance forked three-awned grass habitat.

The majority of the known populations of Forked Three-awned Grass in Canada occur on Beausoleil First Nation lands. Concern has been expressed by Beausoleil First Nation regarding the amount of responsibility that will be placed on them to protect the species. The adverse socio-economic effects and appropriate level of responsibility will be examined in more detail at the action plan stage.

The Endangered Forked Three-awned Grass, also called Ice Age Grass, (Aristida basiramea) is an annual grass found in dry, open, acidic sand barrens, but the species will exploit weedy habitats associated with these sites, such as roadside ditches and old fields. It is highly intolerant of shading and competition from other plants.

Less than 1% of the global population of A. basiramea occurs in Canada, with the core range in the Midwestern United States. In Canada, A. basiramea is currently known from five naturally occurring sites: Cazaville in southwestern Québec; and Christian Island, Beausoleil Island, Anten Mills, and Macey Lake, all in the southern Georgian Bay area of Ontario. Total number of plants in Canada is estimated to be >150 000; most of the population occurs at only four sites and total occupancy (all sites) is about 20 km2 . The largest population is that at Christian Island, where it was documented in 2005 as occurring in 15 sub-populations totaling over 100 000 individuals.

Habitat availability and associated ecological processes are the most important limiting factors for the species in Canada. Threats include limited habitat, sand extraction, succession and absence of ecological processes, development, planting of conifers, invasive species, all-terrain vehicles (ATV) use, agricultural practices, and garbage dumping. Given the current state of our knowledge, critical habitat for the species cannot be defined precisely enough at this time without further studies. A summary of available knowledge is presented including the types of habitat where the species has been found so far. Unoccupied patches of open sandy soil in the vicinity of occupied ones are considered important habitat. The recovery goal is to maintain self-sustaining populations of Aristida basiramea at all the sites where the species is of native origin in Canada, as part of Canada’s natural heritage, and as a fulfillment of the government of Canada’s commitments to protect biodiversity. The recommended approach is to protect habitats, on a site-by-site basis, as follows:

Action plans will be prepared within four responsibility areas: Province of Ontario, Province of Québec, Parks Canada Agency, and Beausoleil First Nation. Many starting points for the development of action plans are listed in the strategy. Actions already underway or completed are listed in Appendix 1.