Lake Saint-Pierre has the largest surface area of marshes and swamps in the entire St. Lawrence basin and exhibits a remarkable diversity of wetlands. This region was also designated as a Ramsar Site in 1998 under the Convention on Wetlands of International Importance, and as a Biosphere Reserve in 2001. 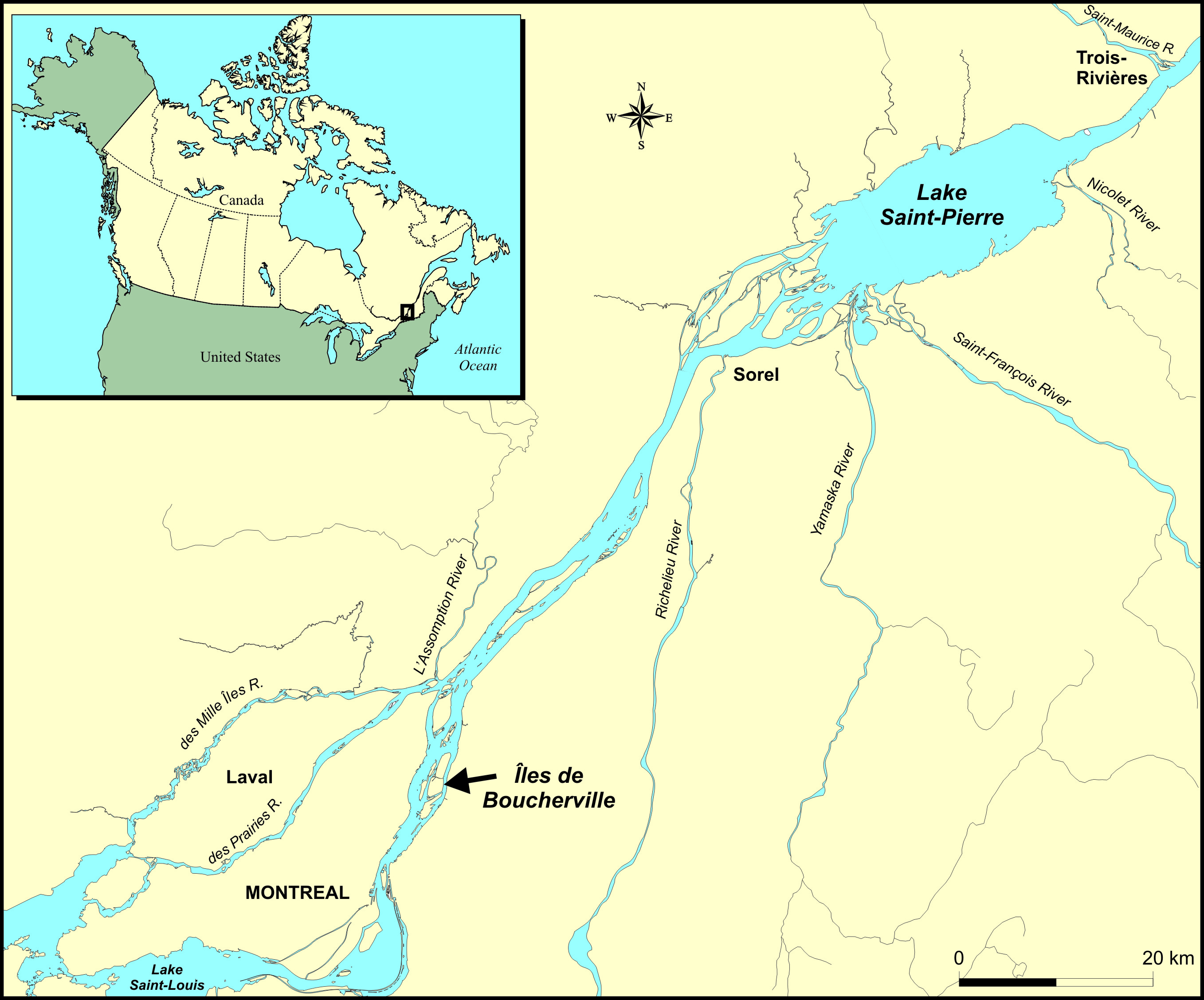 Did you know? The wetlands of the St. Lawrence are valuable because they perform essential ecological functions. They act as natural water purification systems. Characterized by remarkable biodiversity, they supply wildlife with food and provide buffers against shoreline erosion.

Agriculture is still encroaching on the wetlands of Lake Saint-Pierre

The wetlands of Lake Saint-Pierre are exposed to agricultural pressures. According to scientific studies conducted by Environment and Climate Change Canada, it is estimated that 76% of the perimeter of these wetlands is no longer protected by a natural buffer zone, i.e., a greenbelt at least 50 metres wide. 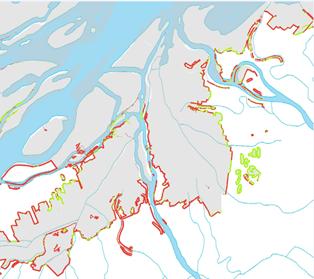 The lack of a buffer zone makes wetlands vulnerable to agricultural encroachment. This is demonstrated by the fact that 826 hectares of wetlands, or the equivalent of 600 soccer fields, in Lake Saint-Pierre have been lost to agriculture since 1990. 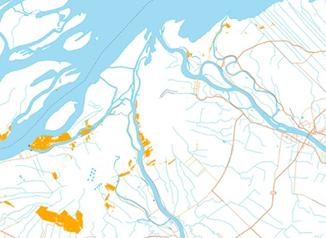 The loss of wetlands in the St. Lawrence Valley is not a recent phenomenon

At the beginning of the colonial period, the area occupied by wetlands in the greater Montreal area was five times larger than it is today. From the 1940s to the 1970s, the pace at which wetlands near urban centres disappeared continued to accelerate.

According to Martin Jean of Environment and Climate Change Canada, who specializes in monitoring the wetlands of the St. Lawrence, “The dynamics of these wetlands are complex; they disappear in certain locations and appear elsewhere as part of a normal process. Their surface area has been relatively stable for about 40 years. However, wetlands are undergoing significant internal changes.”

Did you know? The succession of wetland plants along a moisture gradient from water to dry land is called the hydrosere. It includes a diversity of wetlands ranging from aquatic grass beds in shallow water to forested swamp.

The Parc national des Îles-de-Boucherville [Boucherville Islands provincial park] located near Montreal, has benefited from protection status since 1984. This initiative has helped to maintain the diversity and richness of the wetlands by protecting them from human pressures. Three-quarters of the perimeter of the park’s wetlands is protected by buffer zones. 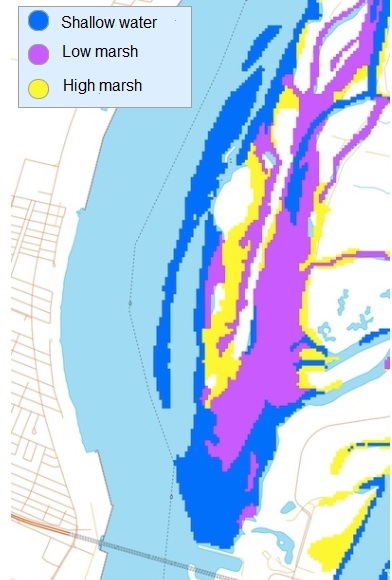 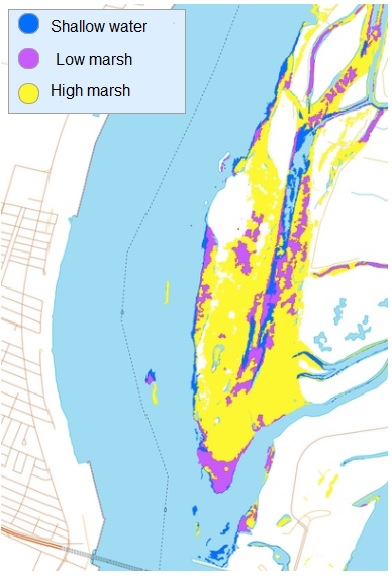 However, scientists have observed changes from one type of wetland to another. For example, the drying out of some wetlands has had the effect of converting low marshes (pink) to high marshes (yellow).High marshes were dominant in the Boucherville Islands park in 2010.

High marshes are home to ducks, muskrats, anurans and invertebrates, juvenile fish, and their predators. Although these marshes play an important role in providing habitat, scientists point out that a proportional diversity of wetlands is preferable to dominance of one type of wetland. Another phenomenon observed by scientists is the colonization of these high marshes by invasive plants such as the Common Water Reed (Phragmites australis). 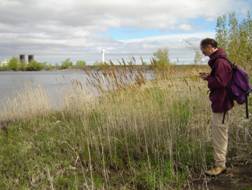 Aquatic grass beds (blue), which are found in shallow water, accounted for only 10% of wetlands in Boucherville Islands park in 2010.  Their surface area was four times larger in 2002. These environments provide critical habitat for many plant (water lily, water milfoil, pondweed, etc.) and wildlife species (invertebrates, amphibians, fish, birds, etc.). Yellow Perch and Northern Pike spawn in these areas. The disappearance or conversion of these environments can have impacts on the ecological functions of the St. Lawrence ecosystem.

“These changes may not be permanent since they are potentially associated with fluctuations in water levels. The low water levels of the St. Lawrence in 2010 may have caused the disappearance of submerged vegetation, characteristic of aquatic grass beds, replaced by open water, free of vegetation. Monitoring of the wetlands in the Boucherville Islands park is still required in order to understand how they are affected by changes over time,” points out Martin Jean.

The general state of the wetlands in these sectors is considered relatively good despite the concerns raised by the changes that they are undergoing. The designation of the Boucherville Islands as a provincial park ensures them some measure of protection. Wetland conservation and restoration projects have been carried out in Lake Saint-Pierre by various organizations, including the Société d’aménagement de la Baie Lavallière, the Société d’aménagement récréatif pour la conservation de l’environnement du lac Saint-Pierre, the Nature Conservancy of Canada and Ducks Unlimited Canada, and by the Canadian Wildlife Service.

Environment and Climate Change Canada is continuing its efforts to monitor the freshwater wetlands of the St. Lawrence, including assessments of their status and changes over time. To this end, scientists are developing and using environmental indicators in order to provide accurate, reliable and useful data. The findings of these studies are helping to increase our understanding of the dynamics of these ecosystems and may contribute to the understanding of emerging issues such as the proliferation of harmful algae.

Open Government - Field data for the mapping of wetlands in the St. Lawrence River between Cornwall and Trois-Pistoles, 2000-2001