Several consecutive days of heat and high humidity occurred in late June and early July. Heat warnings were in place for New Brunswick for up to a week. On July 2, Miramichi, NB, set a daily record high of 34.5°C (94°F), and Caribou, ME, tied its all-time warmest low temperature of 21.7°C (71°F). In addition, Caraquet, NB, had its warmest July on record (since 1889).

Hurricane Arthur moved through the region on July 4-6. New Brunswick, eastern Maine, and coastal Massachusetts saw heavy rain, with many sites exceeding 100 mm (3.94 in.). The greatest total was reported at Upsalquitch Lake, NB, at 192 mm (7.56 in.). Wind gusts exceeded 90 km/h (56 mph) at nearly 30 locations in the Maritimes, with a max gust of 138 km/h (86 mph) in Greenwood, NS. See the Regional Impacts section for details.

Straight line winds of up to 161 km/h (100 mph) damaged hundreds of trees in Maine, New Hampshire, and Massachusetts in early and mid-July. An EF-1 tornado caused damage in Somerset County, ME, on July 15, and another EF-1 tornado occurred in York County, ME, on July 28. Also on the 28th, an EF-2 tornado touched down in Suffolk County, MA, making it the first tornado to strike the county since records began in 1950. 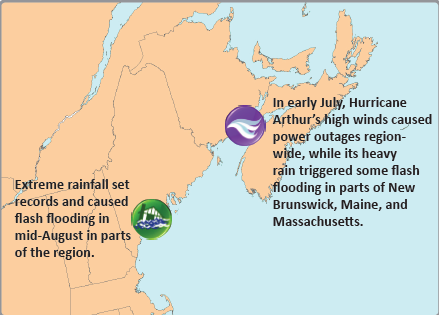 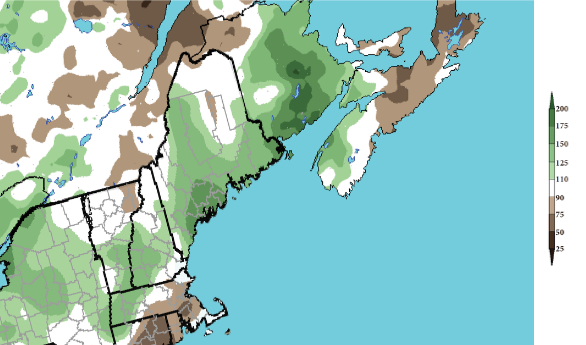 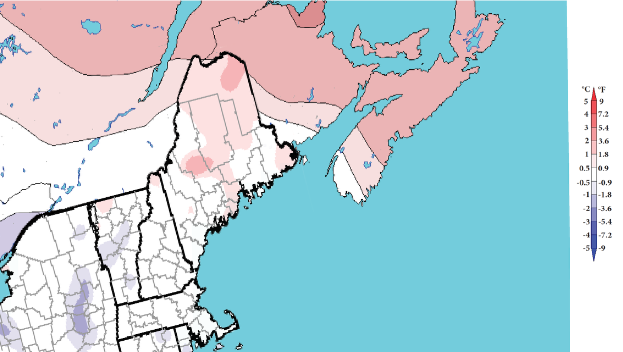 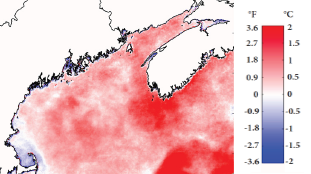 Sea surface temperatures during summer were generally warmer than normal. Warm anomalies of +0.5°C (+0.9°F) to +1.0°C (+1.8°F) dominated the Scotian Shelf, the Bay of Fundy, and the Gulf of Maine. The warmest anomalies of around +1.5°C (+2.7°F) were located along the inshore portion of the southern Scotian Shelf. The warm anomalies were weakest over the deeper waters of Jordan Basin and the shallow waters of Georges Bank. The exceptions to this warm pattern were in Massachusetts Bay and directly east of Cape Cod, with cold anomalies of around -0.5°C (-0.9°F). The regions of cold anomalies and weak warm anomalies were primarily a result of cooler conditions in July and August. 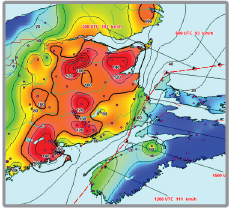 Above: Total precipitation (mm) on July 4-6 from Arthur.

Arthur made its Canadian landfall in western Nova Scotia as a near-hurricane strength post-tropical cyclone on July 5. The maximum sustained winds of near 110 km/h (68 mph) downed trees and power lines across the Maritimes. Nearly 200,000 customers lost power in New Brunswick, making it the largest blackout in the province's history. Around 245,000 customers lost power in Nova Scotia, making it the most severe storm for the province since Hurricane Juan in 2003. Most areas had power restored within several days, but a few spots did not have power for a week or more. Arthur's winds made apple orchards in the Maritimes more susceptible to fire blight, a bacterial infection. Over 90% of apple orchards in Nova Scotia were affected, with many young trees badly damaged. In addition, the storm's heavy rain caused some flash flooding and infrastructure damage. Provincial government offices in Fredericton were closed for a day. (Sources: CBC News, July 14 and September 3)

This spring, Maine became the first U.S. East Coast state to pass an ocean acidification bill into law. The law formed the Maine Ocean Acidification Committee, which held its first meeting on August 1. The group will study and address the effects of ocean acidification on Maine's environment and economy. Ocean acidification occurs when carbon dioxide in the air dissolves into seawater, creating carbonic acid and lowering the water's pH (making it more acidic). Higher acidity can inhibit shell growth in organisms such as lobsters, clams, oysters, etc. In addition, higher acidity makes it difficult for corals to build skeletons. The committee will report its findings in December. (Sources: Portland Press Herald, June 27 and Gulf of Maine Research Institute)

Invasive green crab populations in the Gulf of Maine soared in 2012 and 2013 with record warm water temperatures. Comparatively fewer green crabs were found in Maine in 2014, likely due to cooler water temperatures along the coast during the 2013-2014 winter. However, crab populations in Massachusetts rebounded by July. Green crabs feed on soft-shell clams, one of Maine's major commercial fisheries, and eelgrass, which acts as a nursery for many marine species. With climate change expected to further warm Gulf waters, scientists anticipate further increases in the green crab population. (Sources: Bangor Daily News, August 14 and Massachusetts Division of Marine Fisheries) 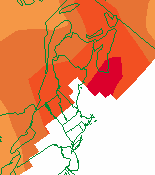 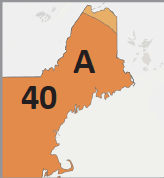 A: Above-normal
40: Probability of above-normal temperatures

Environment Canada and NOAA's Climate Prediction Center are both predicting equal chances of above-, near-, or below-normal precipitation for September-November.

While some warming of the tropical Pacific Ocean waters did occur in August, El Niño conditions remained neutral as of early September. However, model forecasts continue to predict El Niño development. According to NOAA, "El Niño is favored to emerge during September-October, and to peak at weak strength during the late fall and early winter." There is a 60-65% chance of El Niño development during fall and winter. (Sources: Climate Prediction Center El Niño forecast and El Niño blog)

Gulf of Maine Council on the Marine Environment, Climate
Network

This is a new publication designed to help others understand climate trends and their impacts. We welcome your feedback.