Spring snowmelt accompanied by rainfall is the major cause of flooding in Quebec. This was the case for many Quebec rivers in 1974 and 1976, particularly in the Ottawa River basin and the Montreal region.

Usually there is only one snowmelt peak, but for the lower Ottawa River, there may be two. The first peak is the snowmelt runoff from the southern tributaries. The second results from snowmelt from the northern basins, which produces the highest peak flow. The Montreal region is susceptible to the most damaging flooding because it lies immediately below the confluence of the Ottawa River and the St. Lawrence River.

Ice jams are another major cause of floods. A rapid change to mild weather, with substantial rainfall during the spring or during a midwinter thaw, initiates the breakup of a strong ice cover. The section on the St. Lawrence River contains a more detailed description of ice jam flooding in this region.

The province has also experienced heavy rainfall from convective storms. One such storm brought torrential rainfall to the area near Thetford Mines at the beginning of August in 1957 (approximately 250 millimetres in six hours). Enormous damage was caused in Thetford Mines and within the Bécancour Basin, totalling about $2 million ($9.7 million in 1998 dollars). The flash flood which struck Montreal on July 14, 1987, causing an estimated $46.7 million (in 1998 dollars) in damage, is described below.

Flooding occurred along many streams, including the Gatineau, Ottawa, Richelieu, St. Lawrence, Chateauguay, Saint-Maurice, and Chaudière. Flooding of the Gatineau and Ottawa rivers produced the most damage.

The Gatineau River, a major tributary of the Ottawa, drains approximately 26 000 square kilometres of the Gatineau Hills lying north of Ottawa-Hull. It rises to an elevation of 490 metres above sea level and flows into the Ottawa River at Pointe-Gatineau. The river has been extensively developed for hydroelectric power and is also used in log driving operations. Between May 14 and July 2, 1974, the Gatineau River underwent its most serious flooding since the turn of the century.

By May 16, up to 40 residences in Maniwaki had been evacuated and the main street was under water. Rising water levels eventually forced the evacuation of 3000 residents, flooding about one third of the town. Financial disaster assistance amounted to $2.9 million ($8.3 million in 1998 dollars). Considerable damage was also caused at the downstream communities of Wakefield, Chelsea. and Pointe-Gatineau.

A fierce flash flood struck Montreal on July 14, 1987. As severe thunder storms and intense rainfall deluged the city, drainage systems were unable to accommodate the massive runoff. Major expressways were flooded with over 3 metres of water, requiring that people be rescued from their cars. The public transportation system was in chaos. Backed up sewers flooded houses and businesses, and thousands were without electricity.

Montreal had been experiencing a heat wave when on July 14, thunder storms dumped in excess of 100 millimetres (mm) of rain. A recording station at McGill University measured 86 mm of rain in a one-hour period. Rainfalls measuring 100 mm at Parc Lafontaine, 92 mm at the Botanical Gardens, and 99 mm at Dorval Airport were also recorded. Accompanying the thunderstorms were tremendous winds that uprooted large trees and toppled hydro lines.

Flooding was caused by excess water flowing from the streets into buildings and basements, or by water backing up in a congested sewer system unable to handle the flow. The pressure in the sewer system was so great that manhole covers were thrust up onto the streets, aggravating the traffic problems.

The Metro subway lines were closed by the afternoon as the tracks became completely flooded. Buses to replace the paralyzed subway system faced massive traffic jams when valleys and tunnels flooded. In a 30-minute period, the subterranean Decarie Expressway was transformed into a canal as the water rose 3.6 metres. About 300 people were forced to abandon their cars; police and volunteers drove them home. Several hours elapsed before the levels on the expressway subsided enough to permit the removal of cars. North of the Lafontaine Tunnel, workers had to wait up to nine hours to retrieve vehicles. Eventually, over 400 abandoned cars were towed off the expressways. The damage to vehicles was extensive.

The basement of the St. Henri senior citizens hospital flooded, leaving 240 patients without electricity, kitchen facilities, and some medical services. The backed up sewers destroyed much of the chronic care facility as well as several offices and records rooms.

Throughout the city, some 350 000 houses were without electricity, and at least 40 000 homes were flooded. Many of the flood victims could not pump out their basements because the sewers could not handle the stormwater. Theatres, restaurants and shopping malls had to close as floodwaters damaged buildings, spoiled food, and ruined merchandise.

Within the reach of the St. Lawrence River between Montreal and Quebec City, flooding of low-lying areas and damage to shore property has been a traditional winter hazard. Several sections of the river develop ice jams at various times during the ice season. As elsewhere, they occur during the freeze-up period of late-November to the end of December, by shoving and collapsing of unconsolidated ice cover. Major jams also develop during the spring freshet, when rising water levels start to break up the previously stable ice cover. 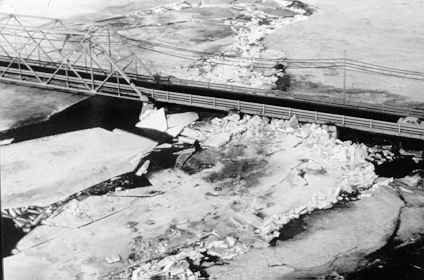 The most disastrous ice jam flood on the  Lawrence occurred in 1886, when water covered Street in Montreal and caused millions of dollars in damage. In 1965, downstream from Montreal, communities sustained damages during the breakup period, and 20 people died.

Ice cover develops on the river between the foot of the Lachine Rapids in Montreal and Trois-Rivières in much the same pattern every year. Large quantities of frazil ice being produced in the Lachine Rapids are joined downstream by the thin sheets of ice formed along the river's edge and dislodged by wind and wave action. As the ice moves into Lac Saint-Pierre the current slows and the ice starts to coalesce. Toward the end of December, the growth of shore ice forms a stable cover across the outlet of the lake. Ice continues to move toward the edge of the stable ice cover. Initially, ice lodges under the stable ice and forms a "hanging ice dam," resulting in the backup of water. Minor flooding may follow. Ice will also continue to back up along the surface. 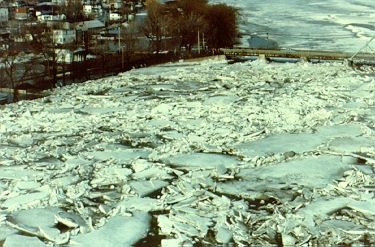 During warmer weather this ice cover can thin, buckle and collapse. Major jams, causing sharp rises in the water levels, frequently occur in the narrows at the head of , in the area in Montreal Harbour.

A potential for ice jams still exists in Lac Saint-Pierre even after the ice cover has formed because icebreakers are used to keep a channel open for shipping. The lake is 13 kilometres wide, 32 kilometres long, with an average depth of 3 metres. The dredged shipping channel is 240 metres wide, 10.5 metres deep, and has a stronger current than the rest of the lake. Often the wind or waves from passing ships break off large pieces of ice that move into the shipping lane causing a jam.

Some major ice jams form at Cap-Rouge, 8 kilometres west of Quebec City. Here the river is 53 metres deep and less than 800 metres wide. During extremely cold periods which coincide with heavy ice runs, the narrow passage can jam. This commonly occurs when the high tide slows the river's current, although ice continues to be pushed into the narrows from upstream. If the receding tide does not break up the jam, a solid barrier can form and remain in place for some time. The release of the jam causes upstream flooding as well as downstream flooding in Quebec City's harbour area. In 1874, the sudden release of a jam caused serious flooding in the harbour and sunk several boats.

Jams continue to occur despite the implementation of ice control measures. For example, in January 1968, during a particularly cold period, a jam developed and continued to build upstream as far as Trois-Rivières. Nine icebreakers spent three weeks clearing it.