Back to Laboratories and Research Support 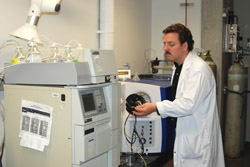 Priority contaminants include flame retardants, poly- and per-fluorinated compounds and legacy contaminants, and studies in key wildlife biosentinel species such as polar bears and bird species, and priority ecosystems including the Arctic and Great Lakes.

For example, the rate of temporal change in the concentration and patterns of brominated flame retardants and organochlorines in Hudson Bay polar bears was shown to be influenced by temporal shifts in diet as a result of increasingly earlier sea-ice break up.

In addition, it was found that bioaccumulation and biotransformation of brominated and chlorinated contaminants and their metabolites is compound-specific between polar bears and their ringed seal prey. Also, the congener composition of organohalogen and metabolite contaminants in polar bears is tissue-specific.

Research from the OCRL has contributed to a circumpolar assessment of the exposure and effects of persistent organic pollutants in Arctic wildlife and fish.

Research carried out in the OCRL contributes to Environment Canada’s objective of ensuring that wildlife and their ecosystems are conserved and protected, and that wildlife health is assessed from a chemical exposure and stress standpoint.

Staff, student, and postdoctoral researchers at the OCRL work collaboratively on various initiatives and projects under the supervision of Dr. Robert Letcher. They often work with other Environment Canada researchers, academics and other partners at national and international institutions.