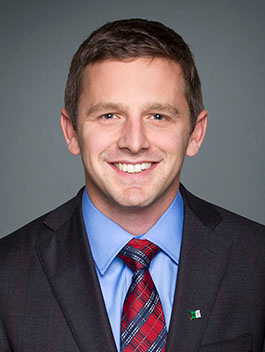 Parliamentary secretary to the Minister of Agriculture and Agri-Food

Francis Drouin was first elected as the Member of Parliament for Glengarry-Prescott-Russell in 2015.

In this role, Mr. Drouin served as a member of various parliamentary committees, associations, and interparliamentary groups, including the Special Committee on the COVID-19 Pandemic and the Standing Committee on Agriculture and Agri-Food, where he advocated for local farmers and economic growth in rural areas. He is the Chair of the Canadian Branch of the Assemblée parlementaire de la Francophonie and a former Vice-Chair of the House of Commons Standing Committee on Government Operations and Estimates.

Prior to being an elected official, Mr. Drouin served as a special assistant in the Office of the Premier of Ontario and worked in the private sector as a government relations consultant. He was previously Manager of Government Relations at Startup Canada, an organization that connects Canadian entrepreneurs and startups with the support, community partners, and resources they need to launch and grow their business.

Mr. Drouin is an active member of his community. He is the founder of the annual Francis Drouin Charity Golf Tournament in support of United Way East Ontario, an event dedicated to providing support to vulnerable youth in the region. As Chair of the Parliamentarians’ Caucus for the Fight against Amyotrophic Lateral Sclerosis (ALS), he helps raise awareness of the challenges faced by Canadians living with ALS.

Mr. Drouin holds a degree in business administration from Collège La Cité and a Bachelor of Commerce from the University of Ottawa. He and his wife, Kate, are the proud parents of Leo-Xavier.