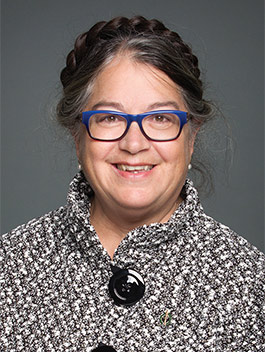 Represents the riding of Gaspésie-Les Îles-de-la-Madeleine

The Honourable Diane Lebouthillier was first elected as the Member of Parliament for Gaspésie-Les Îles-de-la-Madeleine in 2015. She has served as the Minister of National Revenue since 2015.

Minister Lebouthillier is a former elected warden for the Regional County Municipality of Rocher-Percé and owner of La Ferme du Petit Moulin, an outfitting operation. While working for the late Georges Mamelonet, a Member of the National Assembly of Quebec for Gaspé, she focused on social issues in the region.

Before entering politics, Minister Lebouthillier spent more than 23 years working with clients at the Rocher-Percé Health and Social Services Centre.

Minister Lebouthillier served on the Board of Governors of Cégep de la Gaspésie et des Îles, and chaired the boards of directors of Réseau collectif Gaspésie Les Îles and Transport adapté et collectif des Anses. She was also the Vice-Chairperson of the Board of Directors of Les Ateliers Actibec 2000 inc.

Minister Lebouthillier earned her Bachelor of Social Work from the Université de Moncton, and was awarded a Certificate of Appreciation by the Royal Canadian Legion in 2013 for services rendered.

Minister Lebouthillier is the proud mother and grandmother of three adult sons and two grandsons.