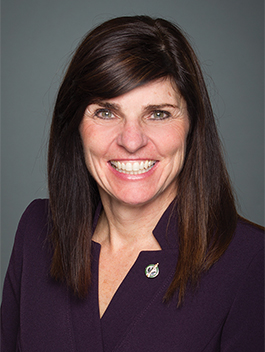 Represents the riding of Hamilton West-Ancaster-Dundas

The Honourable Filomena Tassi was first elected as Member of Parliament for the riding of Hamilton West—Ancaster—Dundas in 2015. She has previously served as Minister of Public Services and Procurement, Minister of Labour, and Minister of Seniors.

Born and raised in Hamilton, Minister Tassi has been the voice of change for families in the city through a lifetime of commitment to her community.

Minister Tassi practised law for six years before leaving to raise her family. She later became a high school chaplain for the Hamilton-Wentworth Catholic District School Board. As chaplaincy leader, she helped establish the D.R.E.A.M.S. (Dominican Republic Education and Medical Support) program, which has enabled thousands of students to live and work with the materially poor in the Dominican Republic.

Driven by her profound sense of civic duty, Minister Tassi has been highly involved in her community. She is a past board member of both St. Joseph’s Hospital and the Catholic Youth Organization, and has volunteered her time with other local initiatives and organizations. Minister Tassi served as a Catholic school board trustee, and was the recipient of the 2010 Brian J. Halferty Award, presented by the Catholic School Chaplains of Ontario for exemplary service.

Minister Tassi, her husband, and two children live in the Hamilton West—Ancaster—Dundas riding.