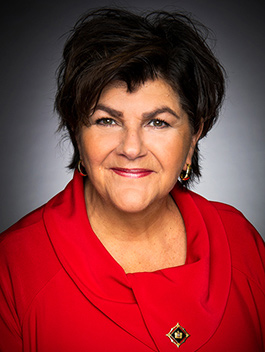 Born and raised in Corner Brook, Gudie Hutchings is proud to call Newfoundland and Labrador home.

With over 30 years of experience as a small business owner in the Atlantic Canadian tourism industry, Gudie’s community ties have made her a strong advocate for rural families and workers.

In addition to serving as the Member of Parliament for Long Range Mountains, Gudie was Parliamentary Secretary for Small Business and Tourism, a role in which she engaged with tourism operators and advocates. She also served as Parliamentary Secretary to the Minister for Women and Gender Equality and Rural Economic Development and helped create a national action plan to end gender-based violence. Gudie has the honour of being a founding member of the National Security and Intelligence Committee of Parliamentarians.

In 2021, she was appointed to Cabinet as Canada’s Minister of Rural Economic Development. As minister, she is focused on accelerating high-speed Internet access for all Canadians as well as improving rural housing, transit and work opportunities.

When at home in beautiful Corner Brook, she can be found gardening, golfing, fishing or painting in her spare time, often in the company of her dogs Jigger, Dory and Marta.