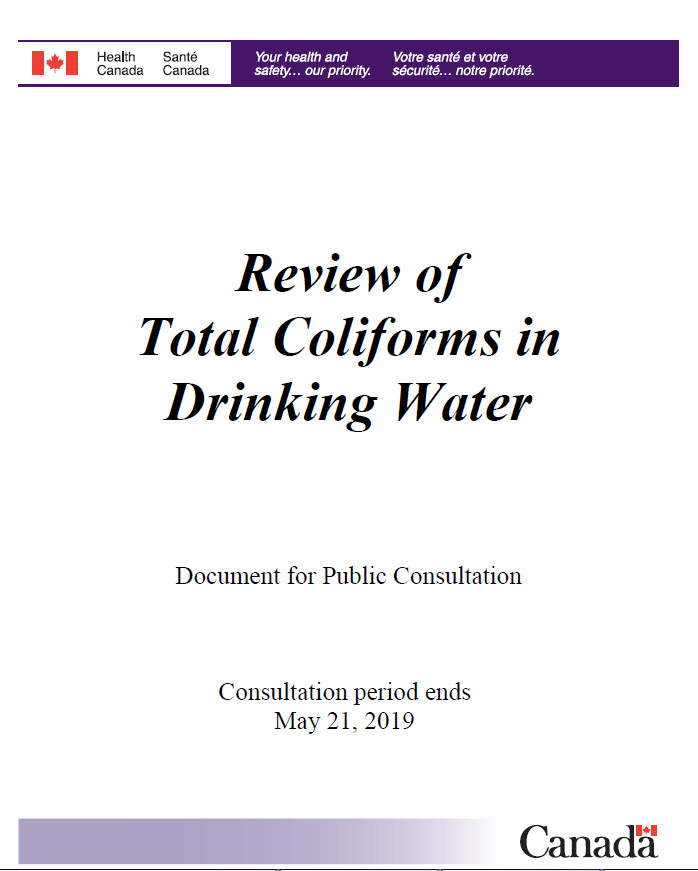 The document is being made available for a 60-day public consultation period. The purpose of this consultation is to solicit comments on the review document and on the proposed reaffirmation of the 2012 guideline for total coliforms in drinking water. Comments are appreciated, with accompanying rationale, where required. Comments can be sent to Health Canada via email at HC.water-eau.SC@canada.ca. If this is not feasible, comments may be sent by mail to the Water and Air Quality Bureau, Health Canada, 269 Laurier Avenue West, A.L. 4903D, Ottawa, Ontario K1A 0K9. All comments must be received before May 21, 2019.

Findings of the 2017 science review

1.0 Conclusions of the review

The current Canadian Guideline for Drinking Water Quality - Total Coliforms was published in 2012. It establishes a maximum acceptable concentration (MAC) of total coliforms in water leaving a treatment plant and in non-disinfected groundwater leaving the well of none detectable per 100 mL. The Guideline also states that total coliforms should be monitored in the distribution system because they are used to indicate changes in water quality. Detection of total coliforms from consecutive samples from the same site or from more than 10% of the samples collected in a given sampling period should be investigated (Health Canada, 2012).

Health Canada reviewed the scientific literature related to total coliforms in 2017. Based on this review, a full update of this guideline technical document is not required at this time, as science continues to support the MAC established in 2012.

This review was undertaken in collaboration with the Federal-Provincial-Territorial Committee on Drinking Water.

This review was conducted to identify any new scientific information on total coliforms and to determine whether a full update of the guideline technical document on total coliforms was warranted. The review primarily focused on peer-reviewed scientific studies and reports published between 2010 and 2017, and included the websites of the World Health Organization, the United States Environmental Protection Agency, the European Union and the Australian National Health and Medical Research Council. Other reports, such as those from the Water Research Foundation, were also reviewed. While a preliminary scoping of the literature highlighted some issues that had not been discussed in the existing guideline technical document, such as the availability of new detection methods and approaches, none would have an impact on the guideline value or its implementation.

The recent literature continues to support the use of total coliforms, in conjunction with other indicators, as part of a multi-barrier approach to produce drinking water of an acceptable quality. It also highlights a number of considerations related to the detection of total coliforms, including the wide range of variability among culture-based methods used for detection, the impact of sampling location and storage conditions on total coliform recovery, and the complexity of assessing the microbial quality of the distribution system.

Given the limitations associated with using any single indicator, including total coliforms, there is a need to look at additional indicators of microbial water quality. Not every indicator will be useful in every situation, thus, site-specific assessments should consider a variety of appropriate methods and indicators.

The wide ranges of variability reported among culture-based methods used for detection of total coliforms indicate that there is a need for further optimization. Rapid and reliable methods for bacterial indicators are needed to ensure the best possible assessment of water quality and thus, public health protection.

Maintaining water quality in the distribution system can be very challenging, and testing for conventional indicators of water quality such as total coliforms, does not provide rapid results allowing for immediate action. Alternative approaches that can be used to detect early changes in microbial water quality need to be further explored.

Opportunistic premise plumbing pathogens (OPPPs) are responsible for a significant number of drinking water-related outbreaks, and their presence in distribution system and plumbing system biofilms does not correlate with that of other microbial indicators, including total coliforms. A better understanding of water quality parameters that facilitate OPPP colonization and growth is needed and will be considered during the next review of the guidance document on waterborne bacterial pathogens.

The review document, available upon request, provides a summary of the findings of the scientific literature review. It formally reaffirms the scientific and technical basis of the guidance provided in the Guidelines for Canadian Drinking Water Quality: Guideline Technical Document — Total Coliforms (Health Canada, 2012). It does not change either the guideline statement or its application and does not replace the existing Guideline technical document. The review document follows the format of the existing Guideline technical document to provide additional scientific information, and highlights considerations which are likely to have an impact on future microbiological documents in this series.