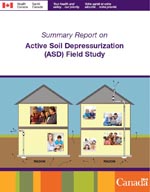 Radon is a colourless, odourless gas that originates from the decay of uranium, naturally present in rock, soil, and water. As radon gas escapes from the ground to the atmosphere, it quickly becomes diluted to very low concentrations. However, if radon gas escapes the ground by travelling through cracks or gaps in the foundation of a building, much higher concentrations can accumulate in indoor air. This is especially the case in poorly ventilated areas of a building or home. As residents breathe in this radon-containing air, radon decay products, or "radon daughters," become deposited in the lungs and release alpha particles. Alpha particles, in turn, release energy that causes damage to lung cells, thus increasing cancer risk. Radon has been found to be the second leading cause of lung cancer after smoking. (Refer to [Reference 1] and [Reference 2] for more information on radon and its health effects.)

Health Canada's Radiation Protection Bureau leads the National Radon Program, which is committed to reducing radon-induced lung cancer risk in the public through research and promotion of radon testing and mitigation in homes and buildings. Where radon concentrations exceed 200 Bq/m3, Health Canada recommends taking remedial measures to reduce levels as much as practicable (refer to [Reference 3] for more information). In order to achieve this, a number of mitigation options are available. One of the most popular methods is known as Active Soil Depressurization (ASD), where a pipe is installed in the foundation floor slab of a home, through which a fan draws in radon-containing soil gas from beneath the home, expelling it outdoors (see Figure 1). This system additionally reduces the amount of radon that is drawn into a home in the first place by reversing the air pressure difference between the house and soil. Note that this is in contrast to a "passive" system, which, instead of using a fan, relies on the stack effect (also known as the chimney effect) to draw radon-containing soil gas up through the pipe stack and discharge it to the outdoors. The stack effect arises from air temperature and pressure differences in a building and is also proportional to building height.

With the installation of an ASD system, a number of factors need to be considered in determining an appropriate fan location, and discharge point location for the exhaust. In the early days of radon mitigation, fans were not well-sealed, which led to fears that they would leak and actually increase radon levels if they were placed indoors. There was also worry that the system exhaust could re-enter the home depending on the location chosen for the discharge point. As a result, the U.S. Environmental Protection Agency (U.S. EPA), whose radon program has been in existence for more than 25 years, recommended that fans be mounted outside the habitable area, with exhaust expelled vertically above the highest roofline away from doors and windows (see Figure 1.B). This recommendation remains in place today.

While it may seem appropriate to follow the recommendations put forth by the U.S. EPA, Canadian winters may jeopardize the function or lifespan of the fan mounted outside the habitable space due to exposure to extreme temperature and weather variations. In addition, a vertical discharge point above the highest roofline is highly susceptible to ice or snow blockage, resulting in system freeze-up issues. These issues can be avoided by placing the fan indoors (e.g. in the basement), and running a short discharge pipe that exits the side-wall near ground level, at right angles to the wall (see Figure 1.A). There is the other added advantage of cost: retro-fitting an existing home with a side-wall vented system is much less expensive than running a full pipe stack vertically through a home, which may encourage more Canadians to mitigate their homes. While these advantages are apparent, concerns still surface over potential leakage or spillage of radon into the indoor environment, and possible re-entrainment back into the house. In a recent study by the radon group at Health Canada, these issues are examined. The following sections detail the findings from observing a number of homes that applied this alternative ASD geometry.

The first part of the study investigated to what extent this alternative ASD geometry was able to reduce indoor radon levels. Long-term radon tests were performed for a minimum of 3 months during the heating season on 52 homes in the Ottawa-Gatineau area which had been recruited after being professionally mitigated for high radon levels (refer to [Reference 4] for more information on proper testing and mitigation practices). All 52 homes had been mitigated via installation of ASD fans mounted indoors with the fan discharge exiting the side-wall of the home at right angles to the wall near ground level. Systems ranged from less than 1 year to greater than 5 years in age. At the end of the first year of the study, 3 homes tested above the 200 Bq/m3 guideline level, requiring further mitigation steps to be taken (e.g. installation of a larger depressurization fan, addition of a suction point and depressurization fan, sealing of a sump pit). In the end, all 52 professionally mitigated homes had radon levels below the 200 Bq/m3 radon guideline value.

Final statistics on the reductions in radon levels achieved in these professionally-mitigated homes are summarized in Figure 2, and in Tables 1 and 2. In Figure 2, both pre- and post-mitigation levels are shown for the 52 homes observed. This shows just how effectively and consistently this ASD geometry was able to bring radon concentrations to levels well below the guideline value, even for pre-mitigation levels in the thousands of Bq/m3. Tables 1 and 2 provide additional summaries on percent radon reductions achieved, and percentage of homes reduced below certain levels. Please refer to Appendix A to view the complete listing of homes with corresponding pre-mitigation levels, post-mitigation levels, and percent reduction in radon concentrations.

In order to monitor ongoing, long-term performance of these types of ASD radon mitigation systems, signed consent has already been collected from 50 of the 52 homeowners that will allow for future contact in the case of follow-up studies.

Part II: Dissipation of Radon Concentrations at the Exhaust Point

The second part of the study investigated how quickly radon levels dissipate with distance away from the side-wall discharge point. To do this, real-time radon dispersion measurements were conducted at 5 homes. At each home, arrays of approximately 10-15 continuous radon monitors were set up at fixed heights and distances away from where the exhaust is expelled, and measurements were conducted for a continuous period of roughly 6 hours. Generally speaking, radon levels fell from thousands of Bq/m3 to less than the 200 Bq/m3 guideline value within 1-2 metres, indicating a rapid decrease with distance.

The long-term indoor post-mitigation results indicate that radon levels can be successfully lowered, and maintained, to levels well below the Canadian guideline value using an ASD mitigation system with an indoor mounted fan and side-wall discharge. This further implies that indoor leakage of radon from the system, and re-entry of radon into the home from the exhaust stream, were not issues of concern for the systems tested. As predicted, extreme cold climatic conditions did not cause freeze-up issues or impact the function of the ASD fan or system, as system components were not directly exposed to harsh conditions in the way they may be with the traditional geometry. The alternative, and conveniently less expensive, ASD geometry has been shown to be quite viable.

The outdoor real-time continuous radon measurements help suggest that one should avoid installing the exhaust point within 1-2 metres of potential areas of high outdoor human occupancy, such as decks or children's play areas. The exhaust point should also not be located close to fresh air intakes for combustion appliances or other ventilation systems, such as heat recovery ventilators (HRVs), or near doors or windows. The guidance for locating side-wall discharge points for these radon mitigation systems can be similar to (or slightly more conservative than) those for locating the discharge point for combustion appliances like natural gas furnaces and gas-fired water heaters.

This study further supports encouraging results from an original demonstration project conducted with the Canada Mortgage and Housing Corporation (CMHC) in 2007Reference 5, and two Kitigan-Zibi studiesReference 6,Reference 7, all of which investigated this technique. This study provides valuable data regarding the efficacy of such a configuration in Canadian urban environments and will be used to support the development of radon mitigation standards currently being developed with the Canadian General Standards Board (CGSB) as well as guidance to the Canadian National Radon Proficiency Program (C-NRPP) certified mitigation professionals. A follow-up project to study the long-term performance of a subset of these 52 homes, in 4-5 years, would also be quite valuable in supporting standards development and guidance documents.

Health Canada would like to thank the professional radon mitigators for participating in this study; Rob Mahoney of Radon Works, Marcel Brascoupé of MB Radon Solutions, and Bob Wood of Mr. Radon.

What is Radon? Retrieved from http://www.hc-sc.gc.ca/ewh-semt/radiation/radon/radon-eng.php

What are the Health Effects of Radon? Retrieved from http://www.hc-sc.gc.ca/ewh-semt/radiation/radon/effects-effets-eng.php