Traditionally, cigars have three components - a filler, a binder and a wrapper - made from either natural or processed leaf tobacco. Little cigars (or "cigarillos") are the smallest type of cigars available on the market. They are similar in size to a cigarette, and often include a filter. Most filtered little cigars have a brown wrapper made of processed tobacco. These look like a cigarette wrapped in brown paper. On the other hand, little cigars without filters are generally wrapped in tobacco leaves. Figure 1 shows the difference between a cigarette, little cigars, and a cigar. 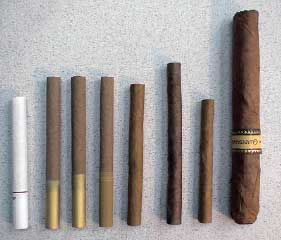 Currently, we know that lighting up a cigarette forms over 4,000 different chemicals. At least 70 of these chemicals are known to cause, trigger or promote cancer. But is the risk of harmful health effects the same for little cigars?

The composition of tobacco smoke may vary slightly depending on the country in which the tobacco is grown (its origin), its type (Burley, Virginia, etc.), and its curing process (flue-curing, air-curing, etc.). Based on the study, concentration levels of some toxic chemicals in the smoke of little cigars were slightly different to those levels found in the smoke of cigarettes sold in Canada. These minor differences suggest that tobacco of different origin and type was used in each case. Nevertheless, exposure to the concentration of toxic chemicals found in the smoke of little cigars poses the same risk of harmful health effects as for cigarettes sold in Canada.