French-speaking immigrants contribute to the strength and prosperity of our country, while adding to Canada’s rich cultural and linguistic diversity. Francophone immigration plays a role in maintaining the vitality of Francophone and Acadian communities across Canada but it also helps address labour market needs and helps sustain Canada as a bilingual country.

To maintain the 2016 demographic share of the francophone population in Canada outside of Quebec, 275,000 new French-speaking immigrants would be required by 2036.

The annual number of French-speaking economic immigrants to Canada outside of Quebec increased from 850 in 2003 to 2,400 in 2017.

However, as the decline of the proportion of the Canadian population (outside of Quebec)Footnote 2 using French as their first official language continues, despite our current efforts and accomplishments, more work is needed. Therefore, there is a need for increased efforts to attract, select, integrate, and retain French-speaking immigrants. This calls for a sustained, multi-sectoral and cross-jurisdictional response that builds on actions taken to date and identifies new ways of collaborating to develop and implement new solutions.

This Federal/Provincial/Territorial (FPT) Action Plan for Increasing Francophone Immigration (Action Plan) outlines a plan that governments can implement, in collaboration with stakeholders, to improve the promotion, selection, settlement, integration and retention of French-speaking immigrants to Francophone Minority Communities (FMCs), using tools and approaches that are suitable to each community. This recognizes the diversity of FMCs across Canada – ranging from large urban centres to small rural communities.

In the implementation of the Action Plan, the collaboration of Immigration and Canadian Francophonie ministers will be guided by the following four principles, which promote positive actions to increase francophone immigration:

This Action Plan centres on three strategies for collaboration:

These three strategies are to be implemented through concrete actions. The Action Plan recognizes provincial/territorial and regional asymmetry by presenting ten collaborative actions (Annex B) as a menu that immigration and Canadian Francophonie ministers can consider, individually or collaboratively, to move towards achieving their respective desired outcomes and allows jurisdictions to adopt initiatives based on respective capacity and policy context.

Immigration and Canadian Francophonie ministers have a role to play in championing the benefits and opportunities of francophone immigration through shared leadership and complementary actions with a variety of partners.

The percentage of Express Entry invites sent to French-speaking immigrants has increased by 40% from 2015 to 2016.

Immigrants who speak both official languages make a significant contribution to the Canadian economy in that they have higher incidence of employment, higher average employment earnings and higher growth in employment earnings than other immigrants. In other words, they tend to fare well economically. However, lack of employer demand, in some jurisdictions, is a major constraint to hiring and benefiting from French-speaking immigrants. Identifying and fostering strong employment opportunities is fundamental to increasing the attraction and retention of French-speaking immigrants to live and work in Canada outside of Quebec. For immigrants, language training tailored to the workplace can also support them in fully integrating into the labour force. Employers could support language needs by offering language training on the job or by facilitating access to third-party training.

In the 10th year after landing, bilingual immigrants to Canada had higher average employment earnings ($51,000) compared to other immigrants ($49,000).

Therefore, it is essential to ensure that employers in FMCs are engaged to identify employment opportunities and understand the advantages of hiring French-speaking immigrants to meet their employment needs.

Increasing the availability, awareness and accessibility of services in French is another key factor that contributes to the successful integration of French-speaking immigrants in FMCs, particularly when services are provided by and for Francophones. Supporting French-speaking immigrants in accessing services in their official language of choice allows the fostering of connections and a sense of belonging within a community, leading to higher retention rates in FMCs.

Diverse and inclusive communities offer newcomers, including French-speaking immigrants, the opportunity to live and work in environments that are receptive and welcoming.

Access to employment and housing can be critical barriers to the integration of French-speaking immigrants in FMCs.

It is important to track the progress of our individual and collaborative actions. Just as important is the ability to learn from the successful actions taken by others. This will require ongoing sharing of best practices to sustain collaborative actions, jurisdictional policy and program approaches, as applicable. Immigration and Canadian Francophonie ministers can report annually on francophone immigration outcomes through their respective tables. For example, immigration ministers will report on progress as part of the Vision Action Plan. The immigration and Canadian Francophonie tables will share progress with each other, through periodic events such as ministers’ meetings and community events that bring together government representatives and other stakeholders.

Identifying performance indicators can provide the context by which individual and collaborative actions can be informed.  These indicators can inform policy direction and support evidence-based adjustments to Action Plan activities, as required. Reporting on progress of the action plan must take into account the breadth and asymmetry of jurisdictional activities.

Examples of potential indicators could include:

Through the above strategies, immigration and Canadian Francophonie ministers seek to support the following outcomes:

This Action Plan recognizes the importance of partnering with communities, municipal governments, national organizations, post-secondary and vocational institutions, immigrant settlement agencies and employers, to leverage opportunities, and to maximize efforts and system-wide enhancements associated with increasing the vitality of francophone communities. Building buy-in and gaining support from stakeholders to implement complimentary actions contributes to the common goal of supporting the integration and retention of French-speaking immigrants in FMCs.

FPT governments will continue to play an active role in leading collaborative actions to attract and retain French-speaking immigrants. The strategies for collaboration in this Action Plan aim to advance the shared objectives of supporting the vitality of FMCs and creating economic opportunities for French-speaking immigrants. The Action Plan also calls on others to join in these efforts by continuing their support for francophone immigration and by recognizing the important role immigration plays in helping to make positive contributions to communities across the country. 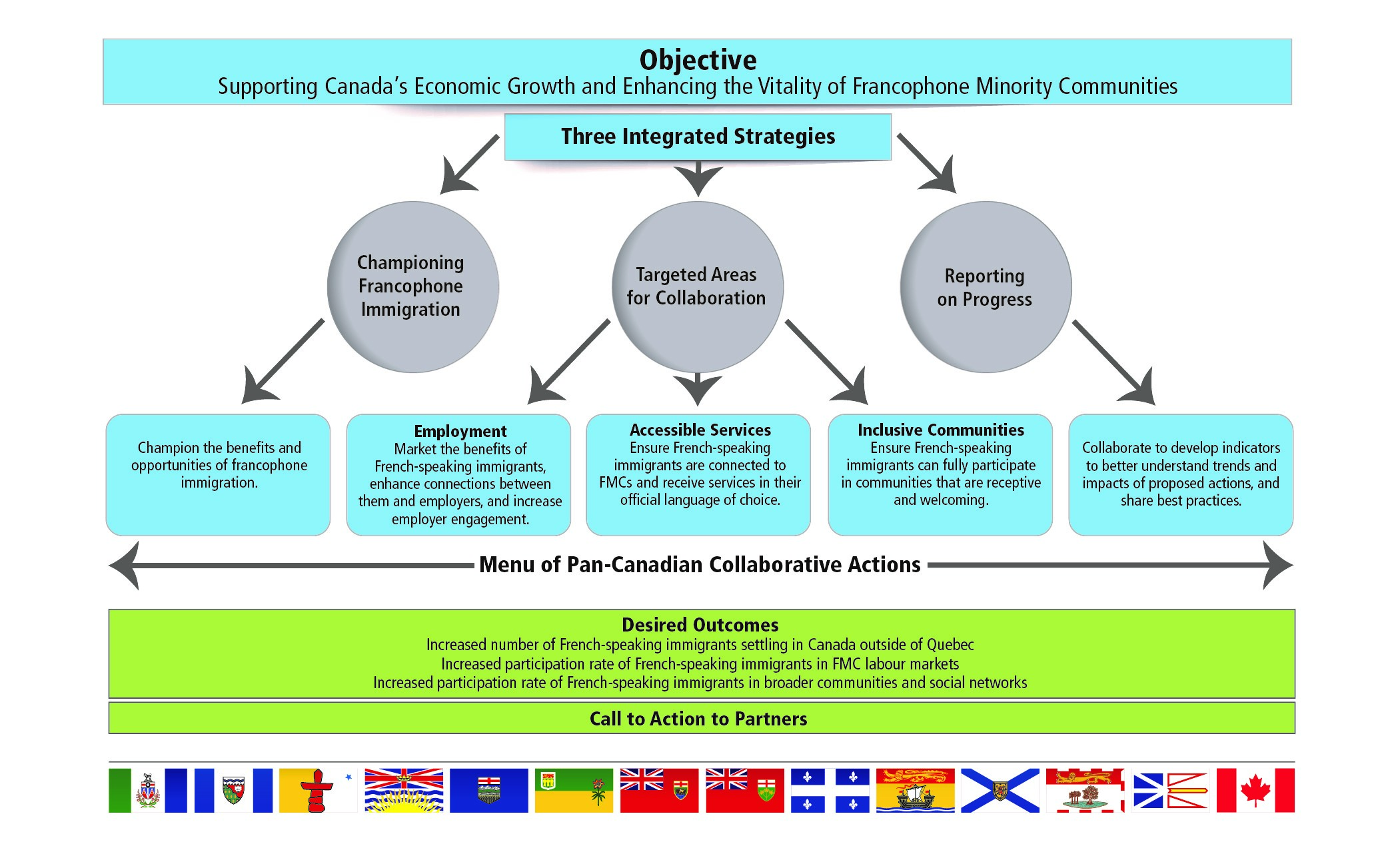 Annex B – Menu of Collaborative Actions

For the purposes of this joint FPT Action Plan, Francophone Minority Communities represent communities outside of Quebec.

Under the Canada-Québec Accord Relating to Immigration and Temporary Admission of Aliens, Quebec has specific responsibilities in planning immigration levels, selection, francization, reception and integration of immigrants. In these areas, it defines its policies and programs, and establishes its own standards. As a result, Quebec favours bilateral relations with the federal government to discuss immigration issues. Nevertheless, it maintains a presence in terms of federal, provincial and territorial activities in order to assert its specificity in immigration and encourage the sharing of information and best practices.

Newfoundland and Labrador’s francophone immigration targets are premised on partnership and collaborative effort with francophone service providers and community organizations.