Refugees are people who have fled war, violence, conflict or persecution and have crossed an international border to find safety in another country.

Asylum-seekers are people who have fled their home country to seek international protection in another country, but whose request for sanctuary has yet to be processed.

Internally displaced people are forced to flee their homes, often for the same reasons as refugees, but have not crossed a border to find safety. Unlike refugees, they are on the run at home.

At the end of 2018, over 70 million persons were forcibly displaced worldwide due to persecution, conflict, or generalized violence.

Together, the top three resettlement countries (Canada, the United States and Australia) represent 70% of annual global resettlement, yet only meet less than 4% of global need. 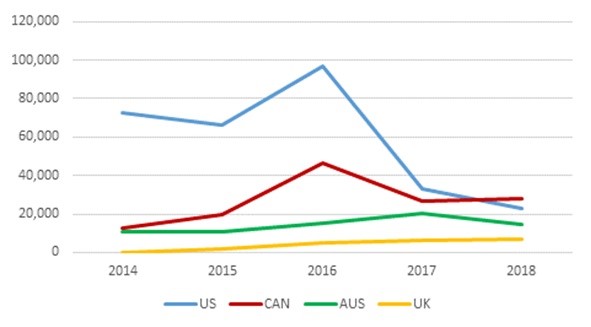 Refugees are selected for resettlement and provided with supports upon arrival:

The Resettlement Program is reliant on key partners

Resettlement service providers provide support to refugees upon arrival (e.g., temporary housing, orientation, links to integration services such as language training) on behalf of the Government of Canada.

Communities in provinces and territories receive refugees based on family connections, the availability of medical services, and other factors.

The Province of Quebec operates its own settlement program under the Canada-Quebec Accord.

The Department also engages regularly with refugee advocacy and sponsorship groups such as the Canadian Council for Refugees, Rainbow Coalition for Refugees, and the Sponsorship Agreement Holder Council.

Globally, migration and refugee needs are increasing. In 2018, only 92,400 refugees were resettled globally, less than 8% of refugees identified by the United Nations Refugee Agency.

This shift, combined with its focus on humanitarian efforts, made Canada the number one resettlement country in the world in 2018.

In 2019, Canada will resettle 29,950 refugees, its highest annual resettlement number to date.

Briefings will be scheduled on Canada’s upcoming role in various international forums related to refugees and strengthening the Private Sponsorship of Refugees Program.