A passion for music: The story of Maryam Masoomi 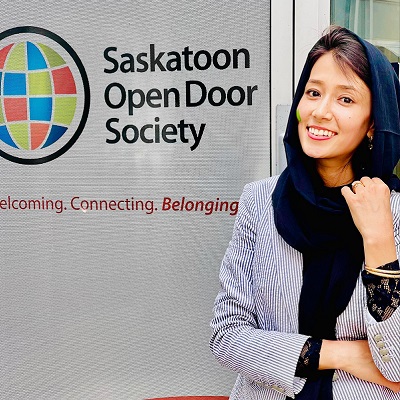 Maryam Masoomi is an Afghan refugee with a zest for life. Growing up in Pakistan and Afghanistan, Maryam was free to explore her interests, including languages, the arts and journalism. She attended Marefat High School, a progressive school that champions education for women. She also learned English and Korean, worked in media and was the leader of an all-female music group called Sound of Afghanistan in Kabul. She sang about education, peace and women’s empowerment, and appeared in music videos online. Taking part in harmless activities like singing is exactly what put her life in danger in August 2021, when the Taliban seized control of Afghanistan.

Maryam knew she would be targeted because of her connection with Marefat High School, her music group and because she is a Hazara woman (a persecuted ethnic minority in Afghanistan). Feeling scared and hopeless for her future, she and her family fled their country. Though leaving was not easy — from facing dangerous Taliban checkpoints to saying goodbye to her beloved homeland — Maryam knew it was the only option for a safe and happy life. She escaped with the help of the Thirty Birds Foundation, a group dedicated to safeguarding the future of young Afghan girls by helping them flee Taliban-controlled Afghanistan.

Maryam arrived in Saskatoon on October 15, 2021. She immediately envisioned a brighter future for herself and her family, which included a return to singing. In fact, she got a chance to kick-start her music group, Sound of Afghanistan, here in Canada during a special performance on Canada Day this year.

The warm welcome she received from different organizations and locals helped her settle into her new community. Today, she is a youth program facilitator at the settlement service provider Saskatoon Open Door Society. She’s also back on the airwaves hosting Kabul Jan, a local radio show that features music from Afghanistan. In her short time in Canada, she has managed to win a leadership award for immigrant youth from the Saskatoon Police Service and Saskatoon Open Door Society, has done many media interviews and has met with His Royal Highness The Prince of Wales. As part of this new chapter in her life, she dreams about serving underprivileged people, especially girls and women, and one day being a member of Parliament in her new country.