The fundamental basis for federalism in Canada (...) was and remains the need to reconcile, balance and accommodate diversityFootnote 1

It is generally agreed that the following characteristics are among those shared by states with a federal system of government2 :

Reasons for a state to adopt a federal system include the need to reflect linguistic, economic and cultural differences of a population, especially one that is concentrated geographically.

Up to 1867, the colonies4 of British North America had no political or geographical links. Each had its own governor appointed by Britain and its own administration including customs and postal system.

In 1867, three colonies in British North America - the Province of Canada5, New Brunswick and Nova Scotia - agreed to be "federally united",6 and form the Dominion of Canada7.

A number of external factors encouraged those colonies to unite, including:

But it was the political conditions prevailing in one of the colonies, the Province of Canada, that favoured a federal type of union.

The Province of Canada (also known as United Canada) 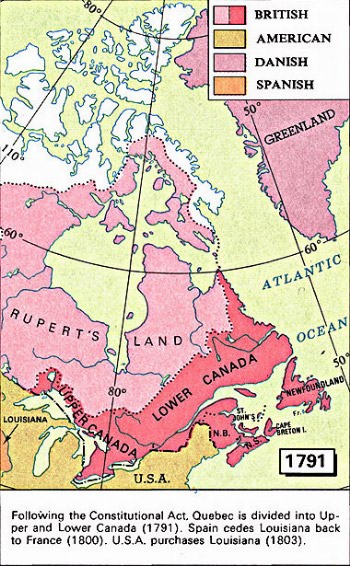 The Province of Canada had been established in 1841 following the Act of Union which amalgamated two hitherto separate colonies, Lower Canada (majority Francophone) and Upper Canada (Anglophone), which had their own elected legislative assemblies that enabled them to make certain respective domestic political choices.

After the union of 1841, it proved virtually impossible for a single government to ensure political stability, despite measures designed to preserve the specificity of each of the communities. Those measures included :

Another compromise would considerably aggravate the political situation. One of the provisions of the Act of Union provided that an equal number of members be elected from Canada East and Canada West to the single legislative assembly of the Province of Canada. That measure had been taken in response to a demand by Canada West, to guarantee it equal representation even though it had some 200,000 fewer inhabitants than Canada East.

As of 1850, Canada West's population was greater than Canada East's. Equal representation was no longer to Canada West's advantage, and it called for representation proportional to its population. However, a substantial portion of Canada East's political class was opposed to such a change, as it feared for the survival of French-Canadian institutions.

By the early 1860s, it had become clear that a certain level of autonomy had to be given back to the two sections forming the Province of Canada. It was also clear, however, that in light of the prevailing economic and international situation, it was in the best interest to maintain a certain level of unity.

It was proposed that the Province of Canada be divided into two entities united within a federation. The powers would be shared between two orders of government, which would ensure unity (federal order) while allowing for the expression of diversity (provincial order). The possibility of the other British North American colonies being a part of that federal union was also considered because of the advantages that an expanded union would bring. 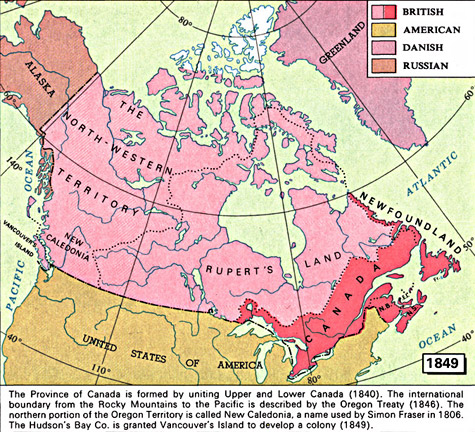 After 1841
Source: Library and Archives Canada

Colonies opt for the federal union

An initial meeting to discuss the union was held in Charlottetown, Prince Edward Island, in September 1864. A proposal for a maritime union of the Atlantic coast colonies quickly gave way to the proposal for a federal union of all the colonies advocated by the delegates from the Province of Canada.

The maritime colonies expressed interest in the proposals by the Province of Canada, which were to their advantage as well. Although similar with respect to language, they were different from both an historical and socio-economic standpoint; through their own elected legislative assemblies, they already exercised a certain level of autonomy over domestic policy.

A second meeting was held in Quebec City, Province of Canada, in October 1864 , at which the division of powers between the constituent entities and a federal government was discussed, among other things. The 72 Resolutions of Quebec included proposals that the existing legislative assemblies (or re-established, in the case of the Province of Canada) would exercise responsibilities related to local issues and that a new federal Parliament would assume powers related to common policies, including in the economic and military fields.

The foundations were laid for Confederation in 1867. Canada would originally be composed of four constituent entities: the provinces of New Brunswick, Nova Scotia, Ontario and Quebec, the latter resulting from the division of the Province of Canada. Over the years, the other British North American colonies and all territories in British North America would also become part of Canada, as either provinces or territories.

The new federation was born in large part out of the need to reflect two different linguistic realities. At the time of the first census after Confederation, Canadians of French origin accounted for 31.1% of the population. The vast majority of them, or 85.5%, lived in the new province of Quebec, while some 150,000 others lived in the other provinces.

The men who would become known as the Fathers of Confederation oversaw the creation of a federation which protected the rights of Quebec's Francophone population - which was determined to preserve its language, its religion and its law - and allowed for the use of both French and English in the federal Parliament, the Legislative Assembly of Quebec, and the federal courts. That protection and recognition of the French language and culture have greatly evolved since 1867. 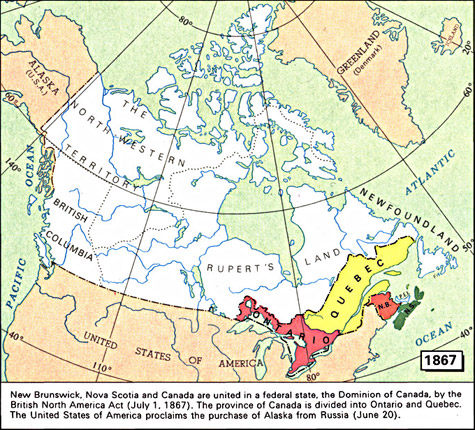 Term used following the American Revolution to refer to the colonies in North America that remained British.

The colonies were the Province of Canada, New Brunswick, Nova Scotia, Newfoundland, Prince Edward Island and British Columbia. There were also vast, scarcely inhabited territories belonging to the Hudson's Bay Company or the British Crown.

The term province was used at that time in the sense of a colony, not a constituent entity. The Province of Canada was established with the amalgamation of the colonies of Lower Canada and Upper Canada by the Act of Union of 1840.

« Whereas the Provinces of Canada, Nova Scotia, and New Brunswick have expressed their Desire to be federally united into One Dominion... » Preamble, Constitution Act, 1867.

The Dominions were at that time quasi-autonomous colonies within the British Empire.