Dissension in the ranks: the ‘mutinies’ that never were

"Collective mass disobedience" has afflicted practically every navy throughout history, and Canada's is no exception. But it remains one of the most profoundly misunderstood aspects of naval life. The leading British naval historian, N.A.M. Rodger, has observed that mutinies involving "the violent seizure of a ship from her officers, on the high seas... [which] may be said to belong to the Cecil B. de Mille school of history...were virtually unknown in the Navy." Instead, "collective actions by whole ship's companies...did happen, and happened quite frequently." The Canadian experience is firmly rooted in that tradition. 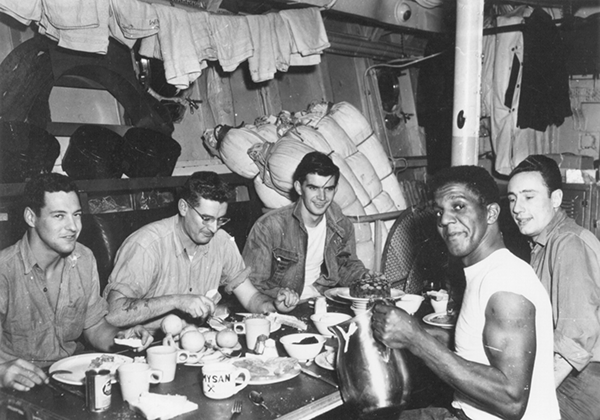 Over the course of three weeks in the late winter of 1949, the Royal Canadian Navy (RCN) suffered an apparent outbreak of mass insubordination. During a fuelling stop at Manzanillo, Mexico, on February 26, 90 Leading Seamen and below of the destroyer HMCS Athabaskan—over half the ship's company—locked themselves in their messdecks, refusing to come out until the captain heard their grievances. Two weeks later, on March 15, eighty-three junior ratings in another destroyer, HMCS Crescent, staged a similar protest while alongside in Nanjing, China. Within days, on March 20, in the carrier HMCS Magnificent, on fleet manoeuvres in the Caribbean, 32 aircraft handlers briefly refused to turn to morning cleaning stations as ordered.

Each episode was defused almost immediately, with the respective captains entering the messes for an informal discussion of their sailors' grievances. Since the men had offered no hint of violence, no one used the charged word 'mutiny'. Indeed, in Athabaskan, the captain was careful to place his cap over what appeared to be a list of demands, so that no technical state of mutiny could be said to exist.

But the ‘incidents’, as they came to be called, constituted a challenge to the lawfully established order of the Navy. Having transpired in suspiciously rapid succession, they seized the attention of a government sensitive to the rising ‘red menace’. A concurrent communist-inspired strike in the Canadian merchant marine sparked fears of subversion also in the naval service, so defence minister Brooke Claxton ordered a commission of inquiry to investigate the state of the fleet.

The commissioners' deliberations were presented in a trim 57-page volume, famous ever since as The Mainguy Report (after the chairman, Rear-Admiral Rollo Mainguy, Flag Officer Atlantic Coast). Popularly described as "a watershed in the Navy's history," its findings, recommendations and conclusions remain a potent legacy. 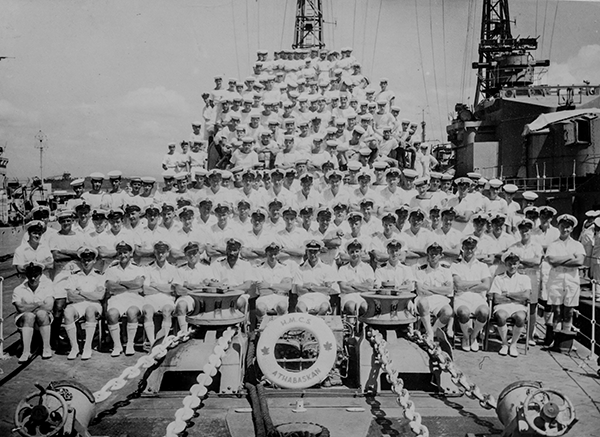 Ship's company of HMCS Athabaskan, one month after the incident of 26 February 1949. This photograph reveals the normal complement of officers (12 in number) across the front row, but an over-representation of chief and petty officers (49) in the second and third rows, against the remaining sailors (105). (photo credit CFPU, PMR 98-157)

The commission quickly determined there were no communists in the RCN, and could find no evidence of collusion. One sailor in HMCS Crescent, a native of Calgary and therefore assigned to the Home Port Division of Esquimalt, indignantly responded to the question: "Communists? Us guys from Alberta were all red-necks!" Instead, the commissioners expanded their mandate to investigate "other matters concerning the RCN." They identified a litany of "General Causes Contributing to [the] Breakdown of Discipline:" the collapse of the Divisional System of personnel management; the failure to provide Welfare Committees for the airing of petty grievances; frequent changes in ships' manning and routines with inadequate explanation; a deterioration in the traditional relationship between officers and petty officers; and the absence of a distinguishing Canadian identity in the Navy.

They laid the blame squarely on an uncaring officer corps harbouring aristocratic British attitudes inappropriate to Canadian democratic sensitivities. The truth is more complex. Although each of the charges had merit in a narrow technical sense, they were misrepresented by the commission.

In a broader context, the incidents of 1949 were the culmination of a pattern of low-level disobedience that had been practiced in the RCN since at least the mid-1930s, probably picked-up by sailors who (like their officers) frequently were rotated for training with the Royal Navy. The messdeck lock-ins were a variation on the civilian sit-down strike, spontaneous displays precipitated by some local event, and undertaken to alert officers to a problem the sailors believed was within the power of those superiors to correct. 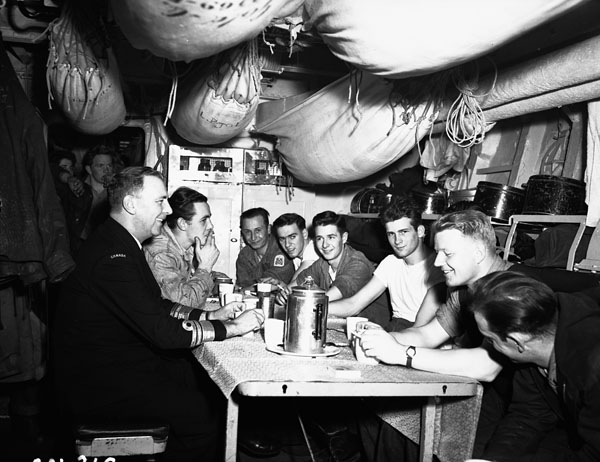 Vice Admiral Rollo Mainguy, who was by then Chief of Naval Staff, sharing a coffee in the Seaman's Mess on board HMCS Athabaskan, 17 February 1953. (photo credit CFPU, PMR 98-151)

Because there existed no officially sanctioned outlet for collective complaints, officers accepted the lock-in as an unofficial protest. If the men's demands were at all reasonable (and invariably they were), they were acted upon, promptly and without recrimination. No member of the RCN was ever awarded the punishment stipulated under King's Regulations for mutiny – death by hanging.

In the more immediate context, the Chief of the Naval Staff, Vice-Admiral Harold Grant, had submitted much the same litany of "General Causes" to Claxton in the fall of 1947 after a rash of incidents that summer (The Mainguy Report described the biggest, in the cruiser HMCS Ontario, but did not mention the others). Grant's request for additional funds to address the problems was denied, so he set about introducing reforms possible within his budget. The last of these, instituted late-February 1949, was a rank and trade group re-organization that effectively promoted each rating one rank. Ships alongside in homeports had their companies quickly re-shuffled to normal. The three deployed ships had no such option, and quite literally there were suddenly too many chiefs and not enough seamen to perform the myriad shipboard duties. Confronted with labour-intensive tasks — fuelling in Manzanillo, sentry duty in Nanjing, a rigorous flying program — overworked sailors sat down in protest.

Intent upon demonstrating the politically correct view of mutiny as the breakdown in relations between officers and ratings, the commissioners overlooked both the larger context and immediate causes. The Mainguy Report was not an accurate depiction of the fleet in 1949, but neither was it a wasted exercise. Sometimes the obvious needs to be stated. After the spring of 1949, the government no longer could ignore the deprivations that cutbacks had imposed on the Naval Service. Within the fleet, no one of any rank could be indifferent any longer to Welfare Committees and the Divisional System, or sanction the informal resolution of group insubordination.

The ‘incidents’ in 1949 were really only that – discreet events, not a systemic failure. Fitting the pattern of a larger ‘tradition of mutiny,’ they were an object lesson in the importance of modern grievance resolution practices and hastened the end of that tradition through the exposure of a formal investigation.

Dr. Richard Gimblett is the former Command Historian of the Royal Canadian Navy.