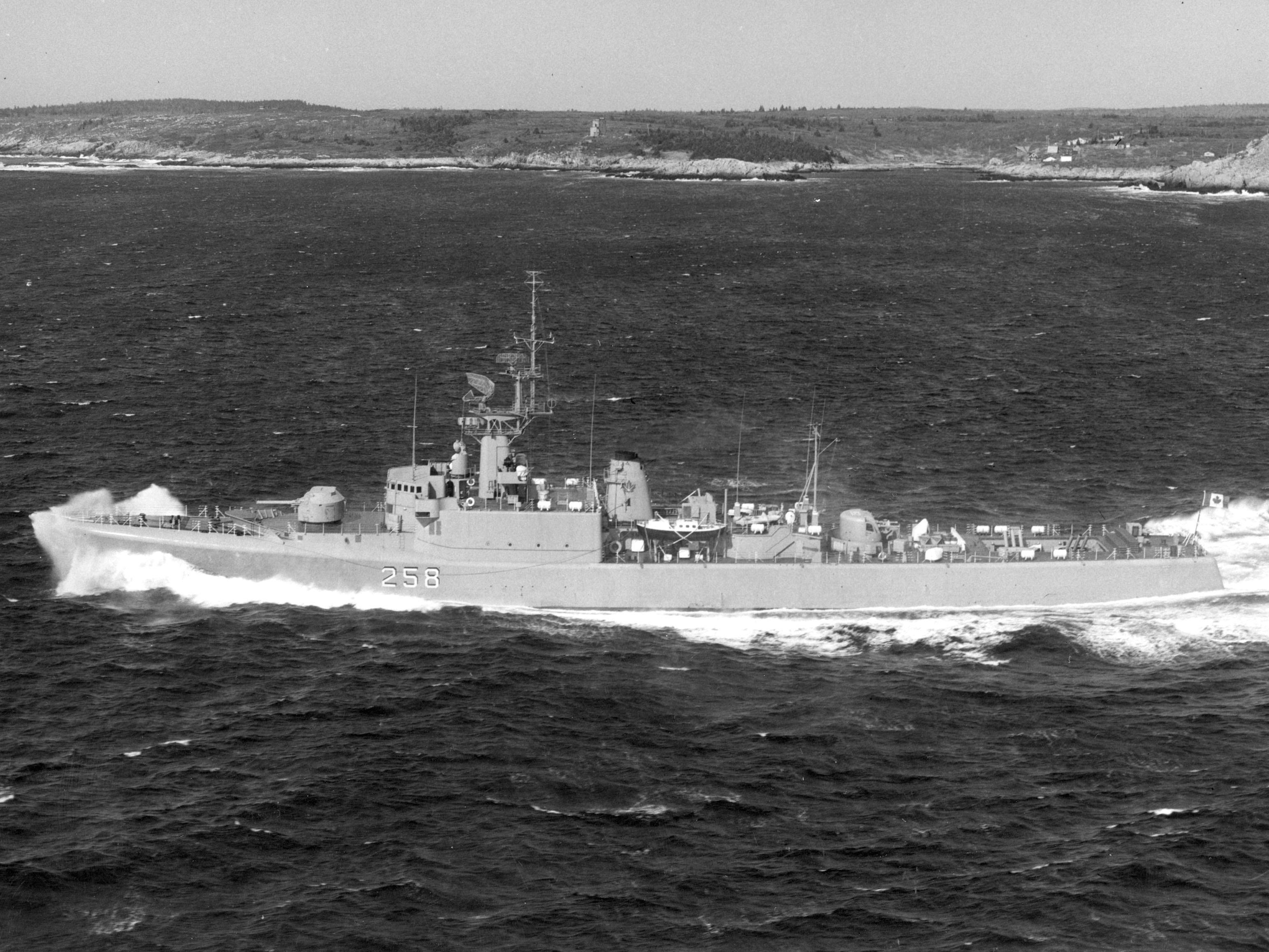 Her Majesty’s Canadian Ship (HMCS) Kootenay was a Restigouche-class destroyer that served in the Royal Canadian Navy (RCN) from 1959-1995. She was the fifth ship in her class and the second vessel to carry the designation HMCS Kootenay.

On the morning of October 23, 1969, HMCS Kootenay was part of a task force that had been exercising in United Kingdom waters and was returning to Canada, heading westward in the English Channel off Plymouth. At 6:05 a.m., HMCS Kootenay was ordered to separate from the task force and carry out a routine full-power trial. HMCS Kootenay started her trial at 8:10 a.m., and at 8:21 a.m. a bearing in the starboard gearbox failed. Its casing had been improperly installed and the oil intended to circulate through it as a coolant overheated, reaching an estimated temperature of 650 °C (1,202 °F), and exploded.

The explosion and the ensuing fire with toxic smoke killed 9 crew members and injured 53 others. Remaining crew members rallied on the Quarter Deck and swiftly organized fire-fighting equipment and rescue operations, however most of the fire-fighting equipment were rendered inaccessible or destroyed by the fire. As a result, three resourceful Ship’s Divers strapped on their SCUBA tanks and went below to assist in rescue operations, themselves at great risk of their tanks exploding. The fire was brought under control by 10:10 a.m. and was extinguished between 10:30 and 11:00 a.m. HMCS Kootenay was badly damaged but was kept afloat by the professional actions of her crew.

The HMCS Kootenay explosion is the worst peacetime accident in the history of the Royal Canadian Navy. Yet, it was the ability and the bravery of the Ship’s Company to respond quickly, and without panic, that prevented the original explosion and resulting fire from escalating into an even greater calamity, which saved lives and the ship itself. As the Captain, Commander Neil Norton would later write, “… a less professional crew could easily have finished the day in life rafts”.

The courageous actions of these former HMCS Kootenay crewmen helped to expedite the creation of the Canadian bravery decorations. In the wake of the tragedy, families, friends, the media and the general public pleaded with the federal government to honour these sailors for their duty and sacrifice. On May 10, 1972, Queen Elizabeth II accredited three new bravery decorations: Crosses of Valour, Stars of Courage and Medals of Bravery. Appropriately, the very first Crosses of Valour were awarded posthumously to two crewmen of HMCS Kootenay: Chief Petty Officer Vaino Olavi Partanen, and Petty Officer Lewis John Stringer. The Star of Courage was awarded to Sub-Lieutenant Clark Reiffenstein and Petty Officer Clement Bussiere, and the Medal of Bravery was awarded to Chief Petty Officer 2nd class Robert George, and Petty Officer 1st class Gerald Gillingham.

Following the incident, HMCS  Kootenay was then taken under tow to Portsmouth, United Kingdom where she was dry-docked and prepared for a long ocean tow by having her propellers removed. HMCS Kootenay arrived back in Halifax on November 27, 1969.

While HMCS Kootenay was under repairs, it was decided to convert her to an Improved Restigouche-class (IRE), and was re-commissioned on January 7, 1972.  She was then transferred to the west coast in 1973 and continued to serve the Canadian Navy with honour and distinction with such visits to Vladivostok as part of a Canadian Task Group (the first to do so since World War II), and taking part in enforcing UN sanctions against Haiti in 1994. Her final trip found her off Uruguay for a two month naval exercise called UNITAS. On December 18, 1995, she was paid off and, on November 6, 2000, towed out of Esquimalt to be sunk as an artificial reef off Puerto Vallarta, Mexico.