There have been two vessels named Fraser in the Royal Canadian Navy. 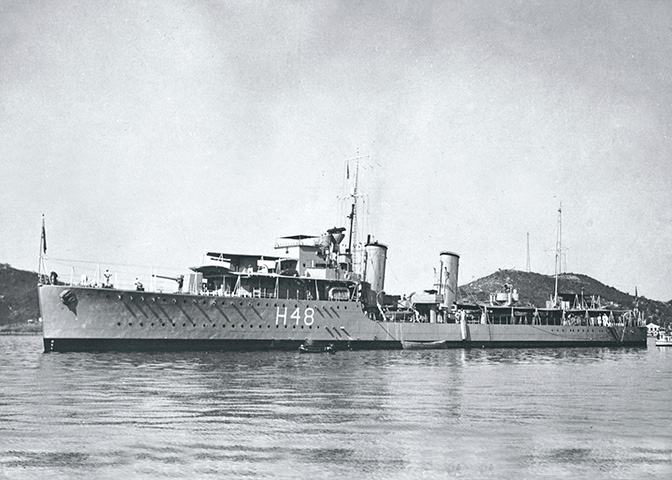 Built in 1932 as HMS Crescent, Fraser was purchased by the RCN five years later and commissioned at Chatham, UK. Arriving at Esquimalt in May 1937, she was stationed on the west coast until the outbreak of the war. Ordered to Halifax, she arrived on 15 September 1939, and like her sisters was put to work as local escort to ocean convoys.

In November 1939, Fraser was transferred to operational control of the RN’s America and West Indies Station, but continued to be based at Halifax. In March 1940, she was ordered to join Jamaica Force for Caribbean patrol service. On 26 May she left Bermuda for Plymouth, UK, arriving on 3 June.

Participating in the evacuation of France, she was returning to Plymouth from St. Jean de Luz when on 25 June she was sunk in collision with the British cruiser Calcutta in the Gironde River estuary, losing forty-seven of her crew. 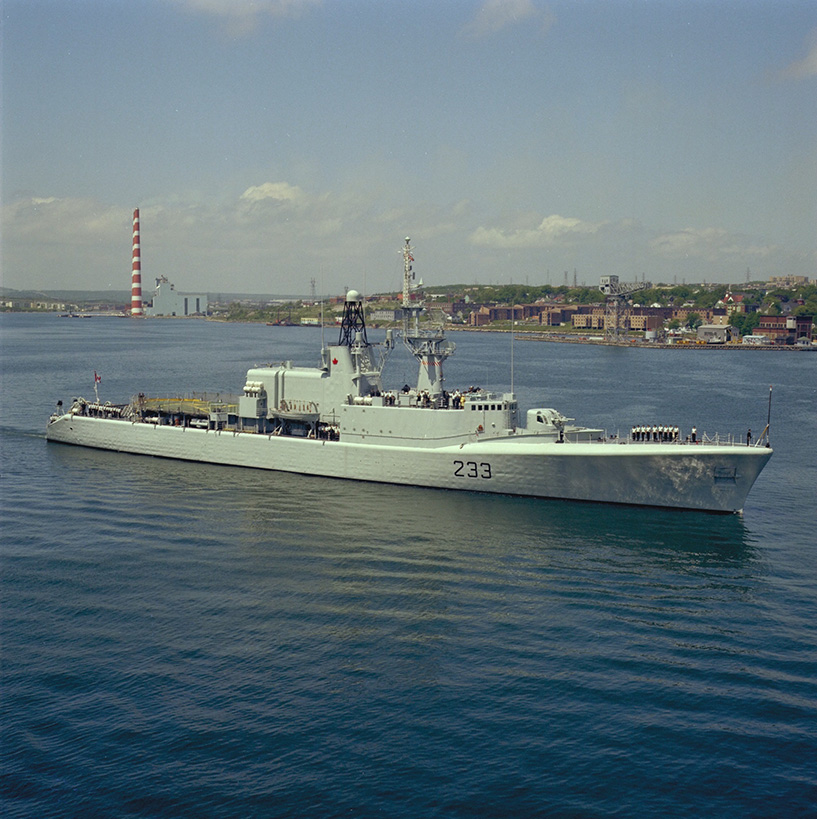 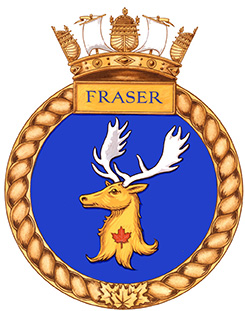 Fraser was laid down by Burrard Dry Dock Co. Ltd., Vancouver, but completed by Yarrows Ltd., Esquimalt. She served on the west coast until her conversion to helicopter-carrying destroyer (DDH) configuration at Canadian Vickers Ltd., Montreal, beginning 2 July 1965.  She was then based at Halifax. She demonstrated the Canadian-designed Beartrap helicopter haul-down system at Washington, D.C., in October 1967.

Fraser was refitted for Destroyer Life Extension (DELEX) at Canadian Vickers Ltd., between 19 October 1981 and 28 May 1982, and was thereafter something of a test vehicle.  She was the first RCN ship to be fitted (1986) with an experimental towed array sonar system (ETASS), and was the test bed for the NIXIE torpedo decoy system and later a tactical aircraft beacon (TACAN).  In 1988 she was equipped to operate the HELTAS helicopter in a passive acoustic role.

Fraser was among the ships enforcing UN sanctions against Haiti between October 1993 and March 1994. Fraser was the last of her class to be paid off, and replaced Assiniboine in a classroom role until 18 December 1997 when she arrived at Bridgewater, NS, to become a floating museum.  She was reacquired by the Department of National Defence in 2009 for disposal and was broken up for scrap at Port Maitland, ON, in 2011.