There has been only one vessel named Skidegate in the Royal Canadian Navy. 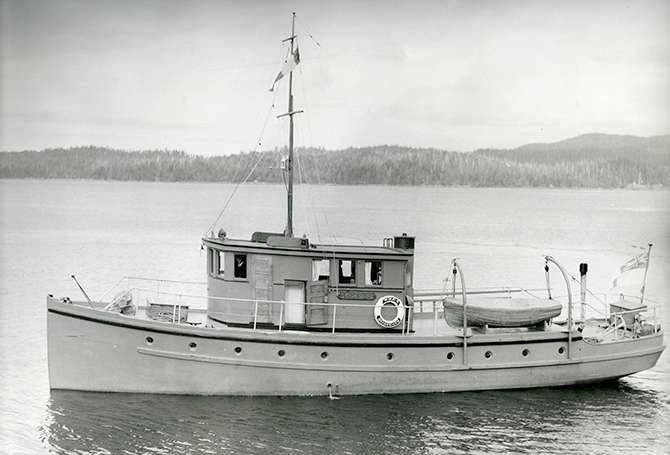 The Royal Canadian Navy came into existence on May 4, 1910, when the Naval Service Act became law, and later that year its first ships were commissioned. The Act provided that the Department of Naval Service should incorporate the fisheries patrol, hydrographic, tidal survey, and wireless telegraphic services of the Department of Marine and Fisheries. The ships associated with these services were the backbone of the young navy during most of the First World War. When not needed as naval vessels they carried on their regular peacetime duties, sometimes performing both roles simultaneously.

With the creation of the Department of National Defence in 1922 the miscellaneous government ships mentioned earlier ceased to be considered as naval vessels and were transferred back to the Department of Marine and Fisheries. From 1922 to 1931, the Royal Canadian Navy (RCN) consisted in its entirety of a destroyer and two trawlers on each coast.

In 1931, the first destroyers designed and built for the RCN, were commissioned; two more were purchased from the Royal Navy in 1937 and a year later, two more joined them. A class of four modern minesweepers was added in 1938, along with a training schooner, a trawler and the training ship Skidegate. This made up the rest of the thirteen ships that constituted the RCN on the eve of the Second World War.

Named Ochecac before her purchase, the ex-Yacht HMCS Skidegate was commissioned on 25 July 1938 for training purposes in connection with the Fishermen’s Reserve, formed that year on the West Coast. Of declining use as the war progressed, Skidegate was paid off on February 18, 1942, finally sold into mercantile service in 1946 and renamed Santa Rosa.