The design phase of the CHARS campus began in 2011 and the complete design was submitted in fall 2014. The station’s design was developed through the Inuit Qaujimajatuqangit (IQ) approach. IQ was developed in Nunavut and articulates the pillars of traditional Inuit knowledge.

Visit the Flickr gallery: Construction of the Canadian High Arctic Station campus to take a look at the construction process. 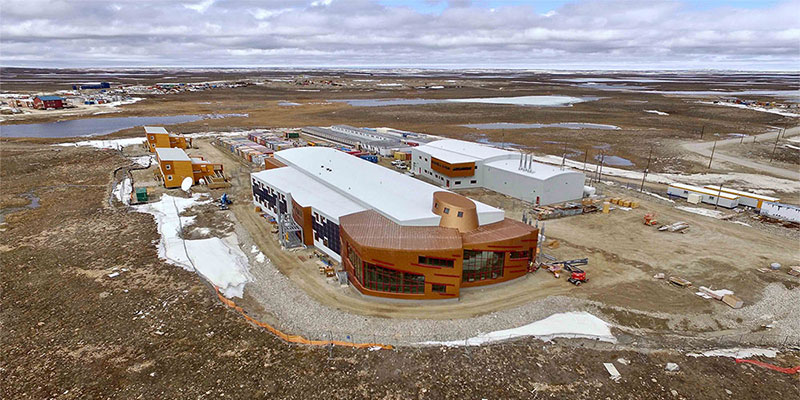 Consultations on design and construction

Consulting is an important part of good governance, sound policy development, and decision-making. In addition to good governance objectives, Canada has common law obligations to consult with Indigenous groups. Consistent consultation and engagement with stakeholders have taken, and continue to take place, throughout the design and construction of the station.

Consultation and engagement by Indigenous and Northern Affairs Canada (INAC) staff with Cambridge Bay residents began in August 2010. INAC staff provided an overview of CHARS and discussed next steps in the process and potential partnership opportunities.

Since 2012, INAC has participated in the Kitikmeot Trade Show in Cambridge Bay and more recently was joined by POLAR to inform residents of scientific results and the progress of the construction of CHARS.

In May 2012, INAC staff visited Cambridge Bay for meetings with elders and for a community town hall to discuss the project and geotechnical work planned for the potential sites.

Regular meetings monthly with the Cambridge Bay CHARS Steering Committee currently take place to ensure that the community is up to date on the progress of the station’s construction.

Throughout the construction of the CHARS campus, INAC staff held meetings and conferences in Cambridge Bay with:

To determine the method that would be used to design and build the station, PricewaterhouseCoopers concluded through an analysis—which can be found in the CHARS feasibility study—that the best approach was construction management. This style of construction overlaps the design and construction phases, meaning construction can begin as the design advances, speeding up the process.

A high level of attention to planning, scheduling, managing and monitoring was required for a project as complex as the CHARS campus. Construction management also provided the CHARS campus with maximum design input and control, ensuring that the facility is able to support POLAR’s Science and Technology program.

The construction manager for the station was EllisDon Corporation, in joint venture with NCC Dowland Construction Ltd.

The construction advisor ensures construction moves forward smoothly and is cost-effective. Efforts were undertaken to improve the efficiency of the construction and design of the station. This process was done in collaboration with the design consultant (Fournier Gersovitz Moss Drolet et associés in joint venture with NFOE et associés architect), INAC, and Public Services and Procurement Canada.

After a fair and open competitive process, the design consultant contract was awarded to Fournier Gersovitz Moss Drolet et associés and NFOE et associés architects, operating as a joint venture. Both firms have extensive experience in architectural design and construction in the Arctic—including science and research facilities— and in the leading edge application of sustainable development practices. The two firms, based in Montreal, Quebec, provided full architectural and engineering designs.

The station’s design was developed through the Inuit Qaujimajatuqangit (IQ) approach. IQ was developed in Nunavut and articulates the pillars of traditional Inuit knowledge:

The CHARS campus is striving for a gold certification in Leadership in Energy and Environmental Design (LEED), even though this designation is normally and more easily applied to southern environments.

In order to achieve LEED gold, the Labs21 Environmental Performance Criteria—a program with the goal of more sustainable, high-performance, and low-energy laboratories—was applied to the CHARS campus.

Working towards LEED gold means that the station includes features such as:

Inuit Benefit Plans (IBP) were used as the key mechanism to deliver on NLCA obligations in procurement related to the CHARS campus, including the construction of the buildings, purchase of equipment, and leased housing. Canada’s procurement obligations, as specified in article 24 of the NLCA, were respected in the building of the station.

This approach included putting in place an Inuit Human Resources Plan that identifies:

As of August 2019, construction of the CHARS campus provided:

Inuit-owned or Nunavut Tunngavik Inc. (NTI) registered firms participating in the construction of the station included:

Other firms working on the station included:

Canada’s procurement obligations, as specified in the Nunavut Land Claims Agreement, were respected in the building of the station.

Working with the community

In selecting the station’s location an important criterion was that it be part of a community. The goal was to have a balanced relationship in which the community and research station support each other and create opportunities and benefits for the community.

For example, the CHARS campus is expected to be the largest power consumer in Cambridge Bay, Nunavut. To ensure the facility’s power supply needs are met without burdening the community, a funding agreement with the local power corporation, Qulliq Energy Corporation, was signed to support upgrades to power generation and transmission infrastructure in Cambridge Bay. This includes a new generator designed to provide an additional 1,100 kilowatts of power to the energy grid.

The CHARS campus also provided funding to the Government of Nunavut for their water treatment plant upgrade and waterline distribution project. These upgrades will provide piped water to the campus and will improve the infrastructure for the rest of the community of Cambridge Bay.

Cost of the station’s construction and research activities

As of 2017-18, the value of architectural design, construction, equipment, and furniture for the Canadian High Arctic Research Station campus, as well as the implementation of the Science and Technology (S&T) program was about  $250 million:

$26.5 million per year will support the ongoing program and operation of the station through POLAR.