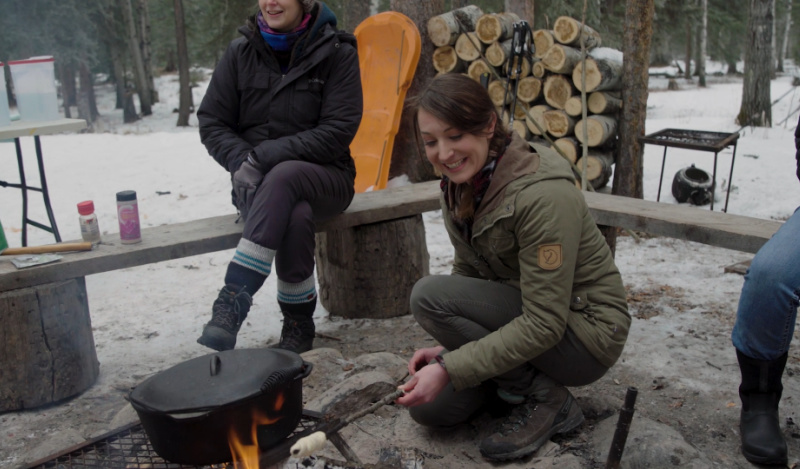 Connection plays a key role in tourism. People want to leave behind the demands of daily life and get outdoors to reconnect with nature and new cultures.

Painted Warriors Ranch is a traditional, Indigenous-owned, tourism business. It offers authentic experiences to help visitors see things from an Indigenous perspective. Ojibway, Cree and Mohawk heritage are part of everything they do. Since 2012, Painted Warriors has reconnected guests to the land through:

Painted Warriors is passionate about helping guests connect to the land and gain new perspectives. Guests get to join in traditional Indigenous activities year-round, and that is key to Painted Warriors’ success.

“We offer land-based traditional skills, such as archery, animal tracking, natural navigation and backcountry horse skills,” says Tracey Klettl, owner and operator of Painted Warriors. “We also do glamping, and in the wintertime we do snowshoe tours.”

Tracey believes that storytelling and communication are the ways to build bridges between cultures. “When you have a glimpse into each other's worlds, it makes a huge difference. All of a sudden you’re seeing things from each other’s perspective.”

Painted Warriors received $60,000 through the Canadian Experiences Fund. Our funding is helping to:

Video opens with imagery of horses in a paddock in winter, grazing on new hay.

Video transitions to a close-up of an outdoor fire.

TRACEY KLETTL, Owner and Operator, Painted Warriors, seated in a dining hall: Painted Warriors Ranch is a traditional Indigenous-owned tourism company, and we focus on land-based skills that are being lost.

Video transitions to a close-up of 2 people walking through snow on snowshoes. A dog follows in their path.

TRACEY KLETTL: We started Painted Warriors because people were really starting to lose their connection to the land. We started with Indigenous youth groups and from there it just kind of grew into a tourism company.

Video transitions to a woman selecting a bow from a stand in an indoor archery range, and following the instructor’s direction to position her feet in the proper stance.

Video transitions to the woman drawing the bow back, aiming and releasing the arrow.

TRACEY KLETTL: We also kind of focus on some of the hunting and gathering skills that we traditionally would have had.

Video transitions to “glamping” tents, and then to two women snowshoeing in a through a clearing in the winter.

TRACEY KLETTL: We do glamping, and in the wintertime we do snowshoe tours where we incorporate much of these other skills.

Video transitions to Tracey in the dining hall

TRACEY KLETTL: When visitors come here one of the most important things that we're trying to do is to have them see things through an Indigenous perspective.

Video transitions to the preparation of bannock, a traditional bread.

TRACEY KLETTL: We're really hoping to build bridges of understanding, it's an important part of our mandate. It's more than just a tourism company to us, and I really believe that the way forward is building that communication between the two different cultures.

Video transitions to an open fire, and cooking the bannock.

TRACEY KLETTL: I think one of the most wonderful things for us that we see when visitors leave here, I think a lot of them are really feeling lost, they're really losing their connection to the land,  and coming out here, they leave with a new skill, a new way of seeing things, and definitely feeling a lot more connected.

Video transitions to show a group around the fire, preparing additional meal items and having a conversation.

TRACEY KLETTL: The PrairiesCan funding has allowed us to upgrade our facilities and made it a lot more accessible, and basically more comfort for our guests.

Video transitions to Tracey seated in the dining hall.

TRACEY KLETTL: The smallest thing can make really the biggest change within the community.

All of a sudden we're building partnerships with Sundre. We're providing jobs for some of the local youth around.

When you have a glimpse into each other's worlds, it makes a huge difference.

All of a sudden, you're seeing things from each other's perspective.