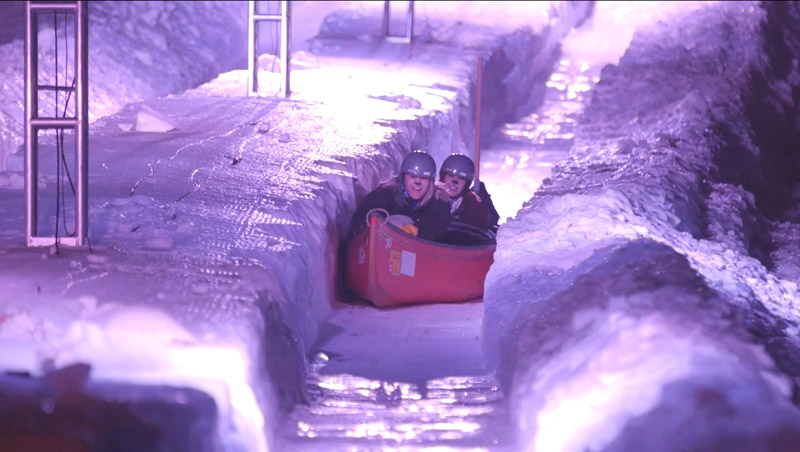 It’s an experience unlike any on the Prairies. The Flying Canoë Volant festival tells the stories of French-Canadian, First Nations and Métis cultures through the prism of an interactive Prairies winter adventure.

The signature event brings to life the festival’s name, which was inspired by a French-Canadian folktale of a flying canoe. The Flying Canoë races attract visitors from across the Prairies and beyond. Picture people racing down a snowy hill on canoes instead of sleds. The festival also features axes, saws and of course, countless laughs from contestants and visitors.

The Flying Canoë Volant welcomed 3,000 visitors when it opened 8 years ago. Now, it attracts over 60,000 people and has made a name for itself as a winter tourist destination in Alberta.

The festival’s rapid growth and popularity comes at a time when Canadians want to learn more about First Nations and Métis history. By sharing their stories, the festival shows Canadians how this unique mix of cultures continues to shape the Prairies.

In 2019, Prairies Economic Development Canada (PrairiesCan) provided funds to add the Flying Canoë race and related events. With this upgrade, the festival set its sights on becoming one of Edmonton’s most popular winter festivals. A thriving civic culture in winter boosts Edmonton’s reputation across Canada and around the world as a year-round cultural and winter city destination.

Transcript: Winter tourism in Edmonton gets a boost with the interactive Flying Canoë Volant festival

Shot appears of a grassy hill.

DANIEL COURNOYER – Executive Director, La Cité Francophone (voiceover, then on-screen): As a Francophone from Western Canada, in the east, we have the sugar shacks because it makes sense.

Shots appear of people sitting in a canoe in the snow, a man in a canoe costume.

DANIEL COURNOYER: In the West we’re different, and we need to embrace that difference and tell a story from our perspective.

DANIEL COURNOYER (speaking to a crowd in French): Thank you very much, thank you so much for being with us this evening.

DANIEL COURNOYER:  French cultural centers  tend to be these silos, cultural silos, and you're either part of the family or you need to be invited in.

And the whole idea behind the Flying Canoë Volant is I didn't want people to observe a culture.

A shot appears of a grassy hill in Gallagher Park, Edmonton.

DANIEL COURNOYER:  We're there to celebrate with everyone. The magic and the wonder of that long winter's night.

DANIEL COURNOYER (partially voiceover):  What captures me the most is people's faces. As the canoe would go by, they would just naturally smile in wonderment and then look at their friend going, "Can you believe this?"

In 2020, was really our first full blown Flying Canoë races. PrairiesCan really gave us the platform and the opportunity to take a seed of an idea to its initial max.

We were able to do something that really caught the curiosity of Edmonton and the Greater Edmonton area. We have a lot of CEOs who have now said we want to put a team in.

I want to be in that canoe. And what we're hearing from other regions is that this is really striking a huge point of curiosity of: "What is this?"

2021, unfortunately, and for reasons we all know, due to COVID 19, we had a real festival contraction going on, But we adapted, we shifted really well and I got to say I'm very proud of our production team. We thought it was more importantly to offer what we could as far as the program and also conserve our energies, to comeback with the Flying Canoë races bigger and stronger in 2022.

And that was the predominant question last year through social media is: "Are the races back?” Flying Canoë, Canoë Volant races really captured that winter spirit, that winter excitement, that winter fun.

DANIEL COURNOYER (in French):  We know that with no risk, there is no pleasure and without this pleasure, we would not have had the chance to discover the magic of the Flying Canoë races.

Text appears on screen: “With funding support from Prairies Economic Development Canada, the Flying Canoë Volant festival was able to introduce the canoe races and related events to their festival schedule.”