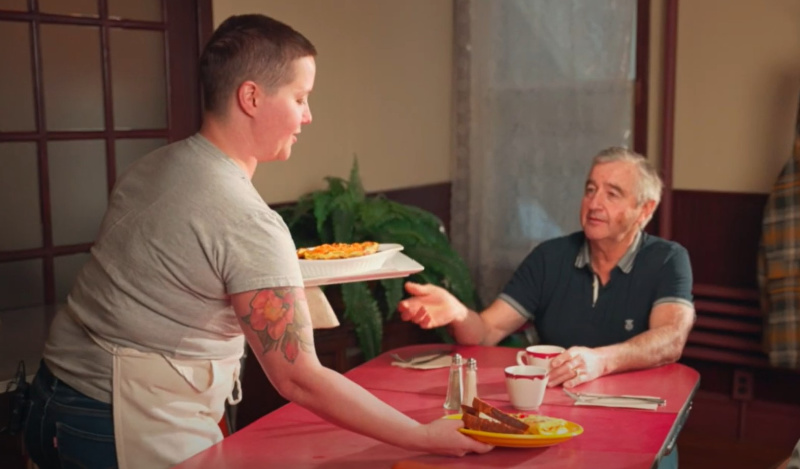 J’em Bistro is a restaurant inside the museum in Saint-Pierre Jolys, Manitoba. As with most restaurants, COVID-19 health measures forced owner chef Josée Curé to close its doors to indoor dining.

With the museum closed and no patio, Josée’s business was grounded. But she did not give up. J’em Bistro pivoted to offer new products:

Josée is a Francophone Métis woman. CDEM’s mission is to help Francophone entrepreneurs and communities. PrairiesCan helps fund CDEM so that the Prairies economy can benefit from diversity and inclusion.

Tourist traffic at J’em Bistro and the museum has been maintained and in some cases increased in the face of recent challenges. Together, they celebrate the culinary and historical appeal of the area. And they continue to develop the story of the Francophones and Métis living and growing together in rural Manitoba.

Transcript: Rural Manitoba restaurant gets help re-inventing its business during the pandemic

Josée Curé ties on an apron.

J’em Bistro logo appears on screen, followed by scenes of the outside of the building and images of preserves on shelves.

J’em Bistro is a small restaurant located in Saint-Pierre-Jolys. We specialize in homemade food and farm to table ... everything from soups, sandwiches, pastries and special events.

Josée Curé shows the many hats she wears, at the computer and in the kitchen.

J’em Bistro is located in an old convent. It’s commonly known as the Saint-Pierre-Jolys museum. It’s really unique. We are close to the river and maples. This building wasn’t the first place I had in mind. But, now that I am here, I can’t imagine myself anywhere else but in the museum in Saint-Pierre-Jolys.

When I opened the restaurant, my main challenge was that we grew quickly. It was new, and there was always something to do. Sometimes I worked here for 12 hours, would go home and rest for a couple of hours and come back to work in the evening so I was ready to open the next morning.

We see scenes of skiing on the exterior of the museum.

When the pandemic started, I was really fortunate to get the various supports from several organizations. There was a contest … the first one was a contest through CDEM, where you submitted a video on how you adapted to the pandemic. And I won.

There are more exterior scenes and more cooking scenes.

Then it was the tours with the museum. That was also thanks to the CDEM, which approached us and the museum and said it was a project they wanted to do and asked us if we were interested. And that’s something that I wouldn’t necessarily have had the time to do without the support, to have an organization that, you know, connects and organizes and pulls everything together for us. So that really helped.

Having organizations like the CDEM is very important for small organizations, especially in minority communities.

We have a store at the restaurant and like to carry many local products. We also like to support like-minded businesses, in minority or Aboriginal, or Francophone situations. And so we help each other and build the community. It’s one way that I can help . . . help them pursue their dream and they help me in the same way.

We get an areal view of the terrain.

And it’s something we want to continue to do, if we can continue to grow together as a community.