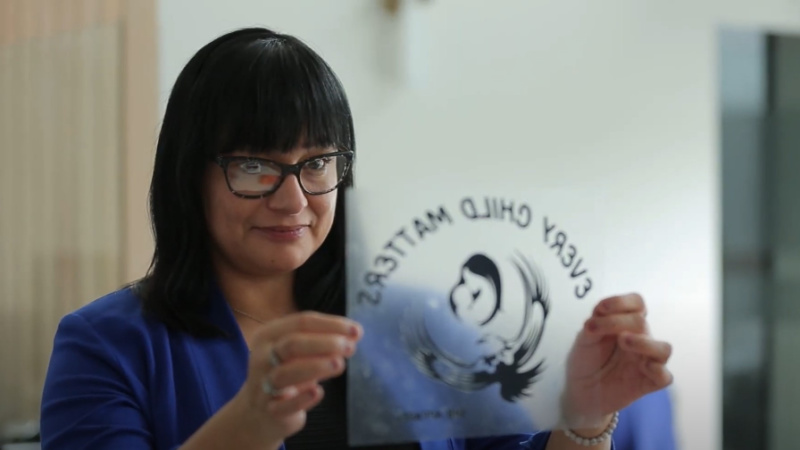 Amanda Sanderson is a Cree woman from the Saulteaux First Nation in Saskatchewan. She watched her daughters and others in her community struggle with mental health issues. An inspirational quote one of her daughters used to carry herself through a difficult time inspired Amanda to create SHB Apparel. Through SHB, she brings positive and encouraging thoughts to others.

SHB is short for 3 affirming concepts:

The company delivers a positive message through clothing. It also provides resources and support to those who struggle with their mental health.

Amanda promotes SHB Apparel through photo shoots with friends and family. These people have never modelled before and pose with their own choice of hair and makeup. The models are encouraged to be themselves in front of the camera and to show their natural and unique beauty. This makes the modelling itself a confidence-building and joyful process.

Through the help of IBDS and their partnership with Direct West, Amanda launched a website in 2021 and hopes to take it to a full E-Commerce site as she progresses. She plans to keep working with mental health issues in her community, using SHB Apparel to lead the way.

Shots appear of SHB Apparel tote bag, then Amanda Sanderson on the set of a photo shoot and sorting through a rack of clothing.

AMANDA SANDERSON – DESIGNER AND ENTREPRENEUR: My name's Amanda Sanderson. I am from Saulteaux First Nation and I am the CEO of SHB Apparel. SHB Apparel means spirit of a warrior, hope for the future and the beauty of life. So SHB Apparel is not only an apparel company, we provide resources and support those who struggle with mental health.

Shots appear of Amanda preparing an image “Every Child Matters” for transfer onto an orange shirt, and the completed shirt.

Shots appear of camera panning across other shirt designs from SHB Apparel and Amanda on the set of a photo shoot.

AMANDA SANDERSON: What inspires me for the designs that I make are quotes that have helped a lot of people. So through my business I speak to youth, adults and families who need the extra help, and I've learned that these quotes have helped them in some way.

Shots appear of stills from SHB Apparel’s website, including a model with the “Be Strong, Brave and Fearless” design, and Amanda on the set of a photo shoot.

AMANDA SANDERSON: The phrase "Be Strong, Brave and Fearless" comes from my daughter. That phrase has helped her throughout her healing journey, and she felt that the phrase would help others out there.

Shots appear of a still from SHB Apparel’s website, then several models on a video from a photo shoot and Amanda on the set of a photo shoot.

AMANDA SANDERSON: My business, I wanted it to be unique, where you have other businesses that hire makeup artists and hairstylists and they transform a person. In my photoshoots, I ask my models to come as they are because they're beautiful and unique just as they are.

Shots appear of a still from SHB Apparel’s website, then several models on a video from a photo shoot and Amanda on the set of a photo shoot.

AMANDA SANDERSON: Our very first photoshoot back in April 2018, I picked out models that never modeled and that were super shy at first. At the end of the photoshoot, they returned back to their parents, and I had parents call me saying that they haven't seen that smile in a really long time. So that's when I knew I was making an impact.

Shots appear of a shirt design on a table, then several models on a video from a photo shoot and Amanda on the set of a photo shoot.

AMANDA SANDERSON: Indigenous Business Development Services, through Community Futures Sagehill, has supported me through mentorships and online workshops to really grow my business.

Impact: An Indigenous woman, inspired by her daughters’ mental health struggles, created a clothing line to help others heal.