The principal terrorist threat to Canada remains that posed by violent extremists who could be inspired to carry out an attack in Canada. Violent extremist ideologies espoused by terrorist groups like Daesh and Al Qaeda (AQ) continue to appeal to certain individuals in Canada.

Cyber threats from hostile actors continue to evolve. State-sponsored entities and terrorists alike are using Computer Network Operations (CNO) directed against Canadian interests, both domestically and abroad. Canada remains both a target for malicious cyber activities, and a platform from which these hostile actors conduct CNO against entities in other countries.

The CSIS Security Screening program represents one of the most visible of the Service’s operational sectors. It helps defend Canada and Canadians from threats to national security emanating from terrorism and extremism, espionage, and the proliferation of weapons of mass destruction. Security screening prevents persons who pose these threats from entering or obtaining status in Canada, or from obtaining access to sensitive sites, government assets or information. In addition, through its government screening program, CSIS assists the RCMP with the accreditation process for Canadians and foreign nationals seeking access to or participating in major events in Canada.

Note: Figures have been rounded
**Individuals claiming refugee status in Canada or at ports of entry 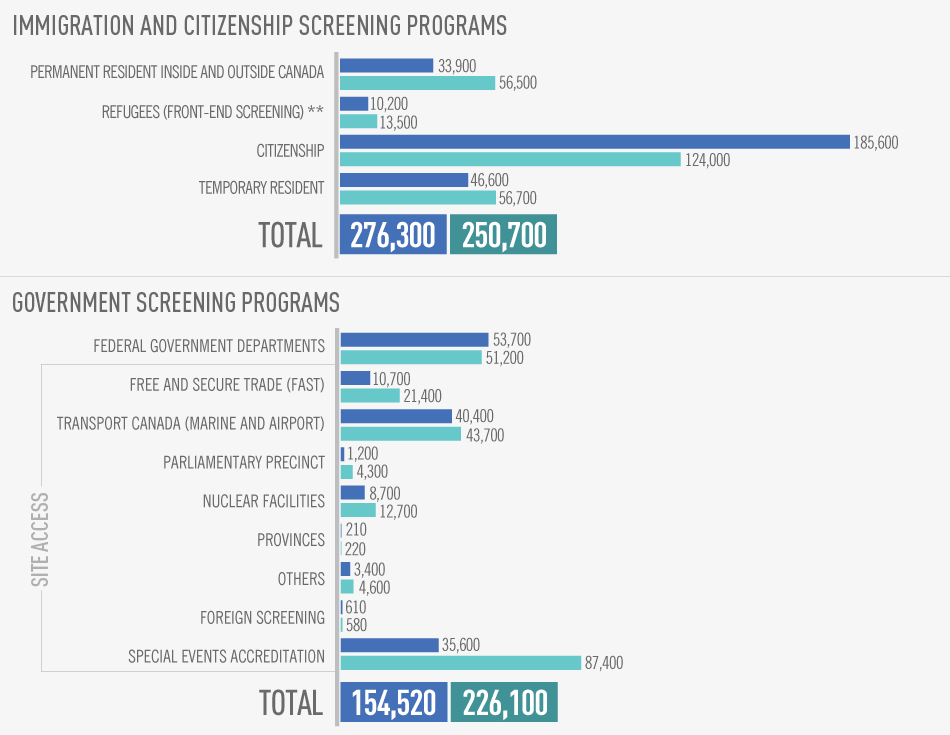 Long description of infographic: Statistics from the security screening program

*Note: Figures have been rounded
** Individuals claiming refugee status in Canada or at ports of entry

* Figures have been rounded

Long description of infographic: Statistics for the 2015 Pan Am Games

The people of CSIS are committed to ensuring a Service that is nimble, flexible and innovative, and takes responsible risks in the delivery of its mandate and in the pursuit of its strategic outcome.

Recruiting the right talent to deliver on our mandate remains a key priority for the Service and the CSIS recruiting website, csiscareers.ca represents the cornerstone of our efforts. During 2014-2016, there were over 2 million hits to the site resulting in close to 90,000 applications being submitted.

Long description of infographic: Statistics from the CSIS recruiting site

The Academic Outreach (AO) program at CSIS seeks to promote conversations with experts from a variety of disciplines and cultural backgrounds working in universities, think tanks and other research institutions in Canada and abroad.

The Security Intelligence Review Committee (SIRC) is an external independent review body that reports to Parliament on CSIS’ operations. It does so through its three core functions: certifying the CSIS Director’s annual report to the Minister of Public Safety, carrying out in-depth reviews of CSIS activities and conducting investigations into public complaints about CSIS. CSIS’ External Review and Liaison Unit (ER&L) manages the Service’s relationship with SIRC, ensuring that it receives all of the necessary information required to fulfil its mandate.

Average n0 of documents per review

Briefings by Service employees per review

Average duration of a review

N0 of new complaints to SIRC

Average n0 of documents per complaint

The mandate of the Access to Information and Privacy (ATIP) Unit is to fulfill the Service’s obligations under the Access to Information Act and the Privacy Act. The Service’s Chief, ATIP is entrusted with the delegated authority from the Minister of Public Safety Canada to exercise and perform the duties of the Minister as head of the institution.

Note: CSIS does not provide a detailed breakdown of its expenditures.

The infographic shows a table broken down by fiscal year.