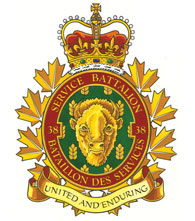 38 Service Battalion is the Reserve Force service battalion assigned to 38 Canadian Brigade Group. The service companies provide transportation, supply, food services and maintenance support to all field units within 38 Canadian Brigade Group. Each company has a variety of military vehicles and support equipment to enable them to fulfill their role mission and tasks.

The units of 38 Service Battalion are:

On April 10, 2010, the former 16, 17 and 18 Service Battalions were reorganized into a single Service Battalion, 38 Service Battalion, as part of the Army Reserve’s Combat Service Support Optimization Plan. While each individual units’ traditions and historical milestones have been maintained, this amalgamation ultimately improved the unit’s operations by promoting easier selection of priorities, and better management of brigade resources. It also ensured that all brigade units are properly covered by the service support team.