The Cameron Highlanders of Ottawa (Duke of Edinburgh's Own) 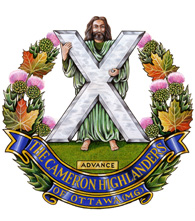 The Regiment, as part of 33 Canadian Brigade Group, is tasked to train soldiers in the light infantry role for augmentation to the Regular Force and for use in emergencies at home. The Cameron Highlanders of Ottawa (Duke of Edinburgh's Own) also proudly serve as the city of Ottawa’s official regiment. The Regiment is tasked, as needed, to provide Ceremonial Guards of Honour for visiting dignitaries and for National Ceremonies and events. Another very active part of the Regimental family is the Cameron Highlanders Pipe and Drums who are regularly tasked in national ceremonial roles, competitions and events in the Ottawa Valley. The Camerons' perennial home is the Cartier Square Drill Hall built in 1879, located at 2 Queen Elizabeth Drive, Ottawa, Ontario.

The Regiment traces its history back to 1861 when a number of Militia companies were organized for the defense of Canada during the American Civil War. One of these companies was mobilized during the first Fenian Raid (Irish nationalists) into Canada from the United States in 1866. Later that year, nine independent infantry companies were united to form the 43rd Carleton Battalion of Infantry. In 1867, the 43rd provided the guard of honour for the opening of the first parliament of the newly formed Dominion of Canada. The 43rd Carleton Battalion of Infantry was disbanded in December 1875.

On 5 August 1881, the formation of the 43rd Battalion of Infantry was authorized. Almost immediately the unit was converted to rifles and re-designated the 43rd Ottawa and Carleton Battalion of Rifles. Permission was granted in January 1882 for the Regiment to adopt the motto of the City of Ottawa - ADVANCE. This remains the motto of the Cameron Highlanders of Ottawa and is worn on their badges.