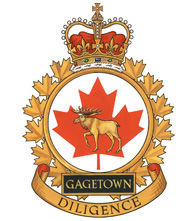 In New Brunswick, 5 CDSB Gagetown is the second largest public sector employer, after the province itself, and third largest employer behind Irving. The Base and its lodger units provide full-time employment to approximately 6,500 military members, including the Reserve Force, and 1,000 civilians. The Base contributes over 200 million dollars to the local economy and more than 700 million to the provincial economy annually.

The total number of personnel at 5 CDSB Gagetown increases dramatically at different times of the year. The training area and facilities are used regularly by units from other Canadian Armed Forces Bases, Reserve units, Cadets, civilian police forces and even American military units. There is on average an additional 10,000 personnel training annually on the Base.

The other formation, the Combat Training Centre, is the centre of excellence for Army individual training. Here at 5 CDSB Gagetown, it consists of:

More than a third of 5 CDSB Gagetown’s soldiers belong to these operational units which are prepared to deploy at home and abroad.

Additionally, there are a number of other units providing support and training to the soldiers:

5 CDSB Gagetown has built and maintains a strong relationship with its surrounding communities and is appreciative of the tremendous support it receives from them.

The following base services are available:

More information on these services can be found here.