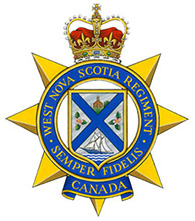 Training in Windsor, Aldershot, Middleton and Bridgetown, September to June:

The West Nova Scotia Regiment is a Primary Reserve infantry regiment of the Canadian Armed Forces. It has seen active service in both the Great War and World War II. The Regiment headquarters is located at 5th Canadian Division Training Centre Aldershot, north of Kentville, Nova Scotia.

As a member of an infantry platoon you will become a member of a cohesive group. You will learn how to professionally operate and maintain various types of weapons and equipment. In addition, other training may include Field Communication, Machine Gunner, Driver and Leadership courses. Also, you will learn field craft and battle procedures including, camouflage and concealment, internal security, patrolling, escape and evasion tactics, and also how to safely use explosives and pyrotechnics, communication and navigation systems.

The West Nova Scotia Regiment (West NSR) is one of the oldest regiments on the Canadian Militia List. The Regiment was formed from both the 69th Annapolis Regiment (1717), and the 75th Lunenburg Regiment, (1870) in 1936. Both regiments descended from the 40th Regiment of Foot, the Prince of wales Volunteers, which was raised on the 23rd of August, 1717 at Fort Anne, Annapolis Royal, NS.

When World War II broke out on the 1st day of September 1939, the West NSR was mobilized as an active service force battalion. The active service battalion left Halifax and disembarked at Gourock, Scotland shortly after Christmas in 1939; they immediately entrained for Aldershot, England. On June 15, 1943 the regiment embarked from England, in the first part of "Operation Husky" the invasion of Sicily. The West Nova Scotia Regiment was the first allied unit to land and stay on the continent of Eurcpe for the entire duration of the war.

The Regiment continued to fight in Italy until February 9, 1945, when LCol Hiltz received orders informing him that the ist Canadian Corps would be transferred from Italy to Northwest Europe. The Regiment moved to Marseilles, France, by sea and arrived in Holland until the German surrender on May 5, 1945. During this time the Regiment won twenty six theatre and battle honours, in addition to the Distinguished Service Order, the Military Cross, Distinguished Conduct Medal and many others. From Sicily to Holland there are 352 graves of West Novas who paid the final sacrifice during the war. There were also 1084 wounded and missing.

Since World War II the West Nova Scotia Regiment has been a unit of the Canadian Armed Force - reserves. it has contributed soldiers to UN peace keeping tours in countries such as the former Yugoslavia, Cyprus and the Middle East, and recently it has deployed soldiers to Afghanistan.