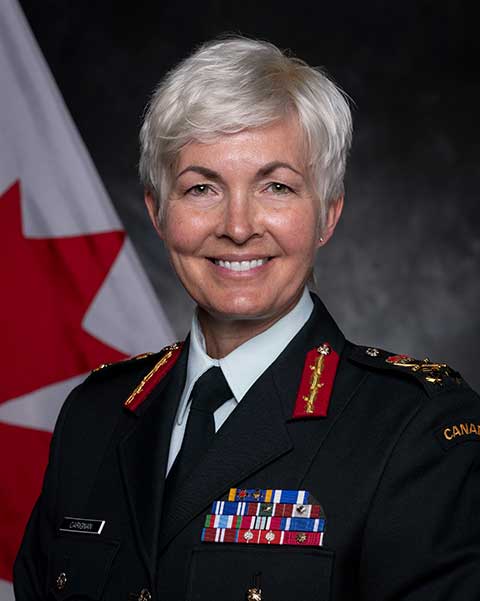 A graduate of the Royal Military College of Canada in Engineering, Lieutenant-General Jennie Carignan was commissioned into the Canadian Military Engineers in 1990.

Since then, she commanded two Combat Engineer Regiments, Royal Military College Saint-Jean and the 2nd Canadian Division, where she led more than 10,000 soldiers and spearheaded crisis operations during the flood relief efforts in the spring of 2019 in Quebec. More recently, she led NATO Mission Iraq from November 2019 to November 2020. LGen Carignan participated in three previous expeditionary operations in Bosnia-Herzegovina, the Golan Heights, and Afghanistan.

Along the way, LGen Carignan earned a Master's degree in Business Administration from Université Laval and a second Master’s degree from the United States Army Command and General Staff College and the School of Advanced Military Studies. She is also a graduate of the National Security Studies Programme from Canadian Forces College in Toronto.

LGen Carignan has been invested as Commander of the Order of Military Merit and is the recipient of the Meritorious Service Medal. She received the prestigious Gloire de l'Escolle medal which recognizes graduates from Université Laval who have distinguished themselves professionally and in service to their communities. She was recently awarded an honorary doctorate in Business Administration from Université Laval.

LGen Carignan was promoted to her current rank in April of 2021 and appointed as Chief of Professional Conduct and Culture, a newly created position in the CAF.

Married, Jennie is the mother of four children, two of whom proudly serve in the Canadian Armed Forces.